What is your experience with the Shift button on the Model 100? After using the Atreus for about 10 months, the Shift button feels out of place and too far for my thumb (I don’t use the Ctrl and remapped Ctrl on my working laptop to be the Windows button).

So, currently I find it hard to use the Shift. Or actually, to ‘find’ the Shift with my left thumb is fine, but going back to Backspace is kinda ‘hard’. I find myself regularly hitting Cmd or Ctrl instead of Backspace.

Also, all the keyboard shortcuts I’ve developed over 25 years of using a Mac need to a bit rewiring in my brain. Or perhaps, it needs remapping?

What is your experience with the Model 100 so far, the Shift on the thumb arc and Mac keyboard shortcuts?

Update: I just switched (remapped) Ctrl with Shift, but then I realised how many times I use Cmd + Shift. I now try to slide my thumb over the arc, but I’m still used to lift up my thumb (jump over Cmd) to hit that left Shift.

From left to right:

On the left I use shift, bksp, ctrl, cmd

On the right I use alt, ctrl, space, shift

This way the shift keys, by far my second most used keys on the thumb clusters, are always the closest one. bksp and space, the two most used keys, are on their original positions with the bumps to help me touch-find them. ctrl keys are right next to them because accidentally hitting ctrl doesn’t usually trigger any menus and therefore break my current workflow. The two most annoying keys to accidentally hit (cmd and alt) that also happen to be the least used are the furthest away to prevent accidental activation. Alt is still next to ctrl so it’s still easy to hit combinations with one hand.

EDIT: BTW I think a further improvement I can make is to swap my cmd and alt (so cmd is on the right half and alt is on the left). This will make hitting alt tab and also cmd + L (windows lock combination) with just one hand super easy.

That’s the change I make alt on the left.

When I first got my Model 01, I made drastic changes to the layout. After a couple of days, however, I decided to reset it to factory and give the stock layout a try. While I ultimately made some changes (the biggest one for my convenience making Alt/Option input Enter on tap), I kept the thumb clusters as-is.

Shift is a bit of a reach, yes. You could try swapping it and Alt/Cmd, but I personally don’t find it hard to re-home my thumb afterward.

(A note: The 01’s homing keys had the raised dots in the center of the keys, which made them easier to find with your thumbs. The Model 100’s homing bars are at the bottom, and my thumbs only seldom find them. I just have to work off of muscle memory, for the most part.)

I’m having that exact problem. Day two so far. As I did with the Atreus, I’m going to try to learn the default layout first and then change it if I need to. So I’m going to give it a week. I’m also getting used to the staggered keys which are tripping my pinkies out pretty bad…but if I get used to it, they will be doing less reaching, which is good. So, we’ll see. I’d try really thinking about what keys your thumbs are hitting and visualizing the rows of four, making an exaggerated lift precise drop of your thumb on the correct key to help you build the muscle memory. I miss being able to hit a key with the outside edge of my palm from the atreus too, but thats really the only thing ergonomically that the atreus has over the model 100

The 01’s homing keys had the raised dots in the center of the keys, which made them easier to find with your thumbs. The Model 100’s homing bars are at the bottom, and my thumbs only seldom find them.

That’s the problem I have with them. Didn’t use a Model 01, so I don’t know whether the homing dots were better, but the homing bars on the thumb keys are rather useless, as I have to actively search for them and bend my thumb very much.

And that results in a lot of mistyping, since my thumbs come to rest on the wrong keys. 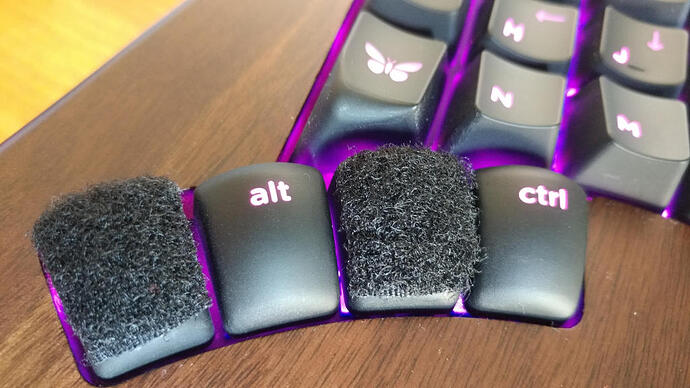 I’ve mirrored the thumb keys (Ctrl Space Alt Shift | Shift Alt Space Ctrl) but I’m still having trouble with getting my thumbs used to doing all this extra work. On the one hand, having Shift on the outside (& furry) makes it ‘findable’ but it’s a stretch for me. I think if I had Shift & Space next to each other I’d be more likely to get them mixed up.

One unexpected annoyance of the thumb cluster is hitting Alt+Space (instead of Space) in games, bringing up the Window menu.

I knew this keyboard would be a bit of a gamble & it’s turned out to be about as dogmatic a design as I suspected. Whether it suits you depends a whole lot on what kind of typing you do, your language and what keyboard layout you use.

For example, using English (intl. with AltGr dead keys layout, you type curly quotes with Alt+Shift+[ and Alt+Shift+] — a bit awkward on a regular keyboard. On the Keyboardio this becomes the nightmarish fun+alt+shift+O & fun+alt+shift+P.

I feel like this design has swapped the pinky doing work (that the orthodox view says is bad, but had never bothered me in many decades of typing) for the thumb doing a whole lot more work. It makes multi-modifier combinations much harder. With a regular keyboard, pinky, ring and thumb can easily hold the (large) modifiers while the stronger pointer presses the specific key. With the Keyboardio you end up being left with the pinky finding the specific key. Yes, you can use the other hand unless you use a language that uses an AltGr (Right Alt) key.

I don’t check my speed very often, but I have been lately as a measure of progress. I’d normally type somewhere in the 60s or 70s, but after a month I’m still at around 20 wpm for anything involving accents or quotes.

Have you tried setting up special keys that emit multiple modifiers when held? Perhaps on a separate layer with other keys set to transparent.

There are a limited number of keys available, so I’m sceptical that this would work for me in practice. Held keys might seem like a good idea, but you often end up finding that you rely on holding the original key in some context. Strategies for activating many layers can also become complicated fairly quickly.

Do you have a (multiple modifier) setup that works for you?

I don’t use this strategy, because I don’t have the same issue. I’m just spitballing to try to help.

I have or had a similar „issue“ with thumb shift. My hands seem to bee too small to reach. And i could not really get comfortable with it.

So, i ended up putting the shift key on both lowest outer keys, one of which does have a second function as + key when typed.

When i got my Model100 i had to use it for some time with thumb shift, but it just did not “Click”. So, I really understand the problem.

(Special shift is temporarily shifting to my programmer layer, with all those braces on the homerow)

Good stuff in here. Some of it I’ll definitely try out. Thanks!

This is my only complaint about 100 vs 01. Those dots were more pronounced.

TBH I’m not a fan of Shift being a thumb key, and I map it to its “normal” pinky position. I mostly use the thumb keys for space, enter, and layer shifts. Custom layers are great.

I’ve had a lot of trouble with the left thumb knowing which key its on. I 3d printed a new thumb key and the texture difference has helped a lot. Hopefully once the muscle memory kicks in I can put the original keycap back 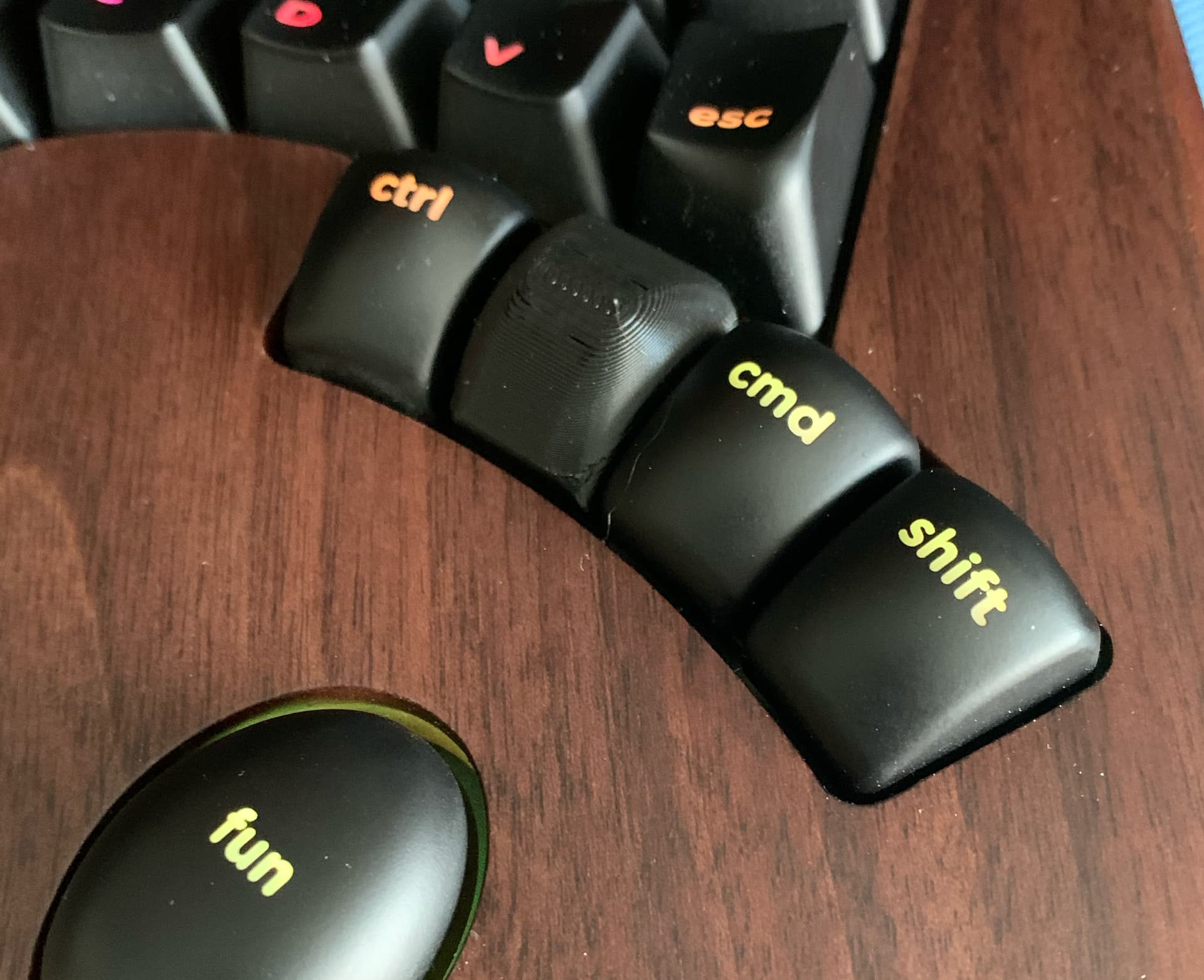 It makes multi-modifier combinations much harder. With a regular keyboard, pinky, ring and thumb can easily hold the (large) modifiers while the stronger pointer presses the specific key. With the Keyboardio you end up being left with the pinky finding the specific key.

Why not just use that plugin that allows you to tap the modifier, then tap the key? Then you don’t have to hold both at once.

There are a limited number of keys available, so I’m sceptical that this would work for me in practice.

Coming from the Atreus, you’ve got a ton more keys on the Model 100! I’m putting dedicated Ctrl-Shift, Ctrl-Alt, Alt-Shift, and Ctrl-Alt-Shift keys on my layout.

I’m also switching from the Atreus. I used the Model 01 before the Atreus.

my thumb keys are:

Ctrl, Bksp, Shift, Space on the left
Alt, Left, Down, Right on the right

I don’t know where Shift is on the default Model 100 - I never use a default keymap - but I like it in the third position on the left hand.

They do not. Entirely different keyswitch underneath, with very different stems.

I switched Ctrl and Shift again (see image). After being used to the Atreus layout, this types a whole lot better.

Next step is to see if I need to remap and how to remap certain keyboard shortcuts using Fun.

Haven’t done Macro’s before. Perhaps there something there too? 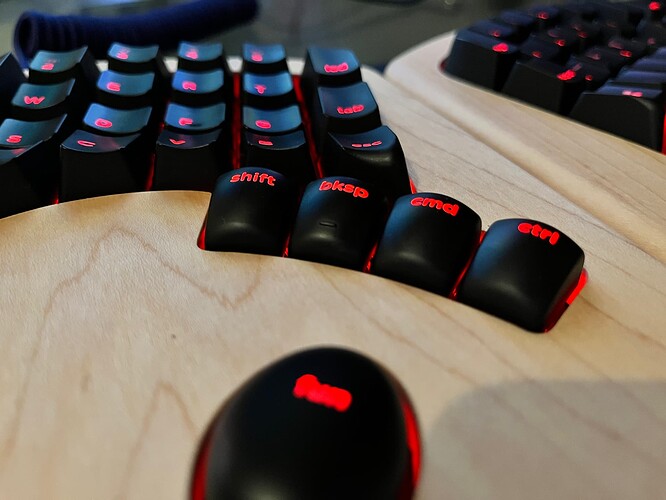