Since I use my Model 01 while seated (usually) and like to have it as close to my lap as possible, the included “spider” stands are a bit too thick for my liking. Unfortunately all the other options I’ve seen are even worse.

After doing some prototyping with my 3D printer, I think I’ve come across the best way to stand the keyboard with the tented crossbar, however, and… no 3D printer necessary! I simply removed the spider stands, put their thumbscrews in all the way, and then put a large dollop of hot glue onto the face of the thumbscrews, waited for it to cool a little bit, and then pressed it down on a cold, non-sticky surface to shape the glue into optimal support feet.

There’s still a bit of flex when I push down on the middle of the keyboard, but since my palms/arms always rest on the outer edges this seems to be fine, with no flex during actual use, and this is much more comfortable for me.

Are there any huge pitfalls that anyone can see from doing this, and any other approaches people have taken to tenting the keyboard without putting more height under it than necessary? 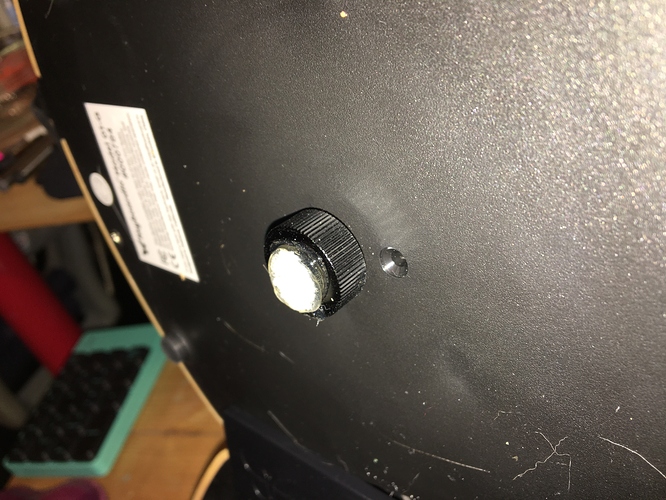 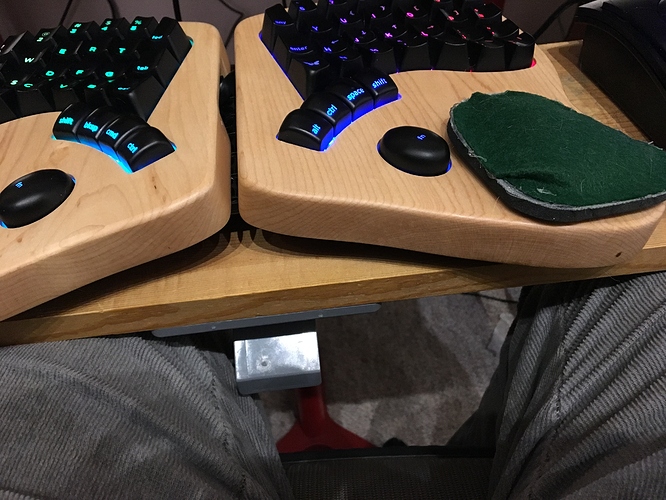 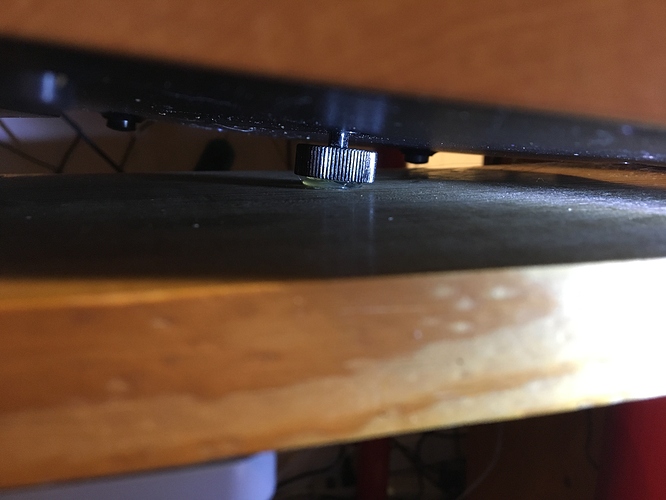 Are there any huge pitfalls that anyone can see from doing this,

There’s a reason we tell you you need the stands if you’re going to use the tented center bar on a desk.

To know if a stand is going to be enough, you need to make sure it works without the center bar connected. Otherwise, the weight of the wood will slowly warp both of your enclosures in a very not-covered-by-the-warranty kind of failure.

If you want to tent the keyboard to a single angle without adding height, triangular blocks of wood for each side (ora single, larger block of wood (also triangular)) with holes for the mounting screws is probably your best bet.
If you want to shave off even more height, you could remove the electronics from your enclosure and cut out cavities in the block of wood to drop the keys+keyplates+electronics into.

There’s still a bit of flex when I push down on the middle of the keyboard, but since my palms/arms always rest on the outer edges this seems to be fine, with no flex during actual use, and this is much more comfortable for me.

You could also, with a lot more hotglue (or something less hacky) build a large foot under the center bar.

Okay, thanks for the warning! I’ll try attaching a block to the center bar. Or I’ll go back to my plastic wedge prototypes and remove the center bar. Both seem like reasonable options.

Okay I played around with the prototype I made last night and got it to the state where it’s working perfectly for what I need and is self-sufficient, with no connecting bar. There’s a few things I’d like to tweak about it but after I do I’ll post an STL/OpenSCAD to Thingiverse!

How do I get my hands on such a thing with zero knowledge of or inclination to try 3D printing?

Find a friend with a 3D printer? Or if you have woodworking skills this would be easy to cut out of a block of wood. I just use a 3D printer because I happen to have one and it’s fun.

There’s a reason we tell you you need the stands if you’re going to use the tented center bar on a desk.

I hadn’t noticed this. I don’t quite follow. When I use the tented center bar, I use it on it’s own. Am I supposed to use it together with the spider stands? That doesn’t make sense to me - the spider stands impart their own angle. If I attach them, I don’t really need the tent bar. What am I misunderstanding here?

On its own, the bar does not provide enough support. In the manual describing how to use the center bar, we tell you that if you ar going to use the tented center bar with the keyboard on a flat surface, you need to use the stands. At their maximum tent, the stands are designed to match the center bar.

Earlier versions of the center bar ( before the stands existed) had flip out feet. The experience was, unfortunately, sub par.

The thing I’m still unclear on is, if I already have the stands on, what do I gain with the tented center bar? Is it just to keep the halves close, since they already get their angle from the stands?

Yep. Some people just want to make sure that the two halves stay positioned relative to each other.

I am running late for a thing so I can’t post these files to Thingiverse yet but I am happy with this revision of the stand. 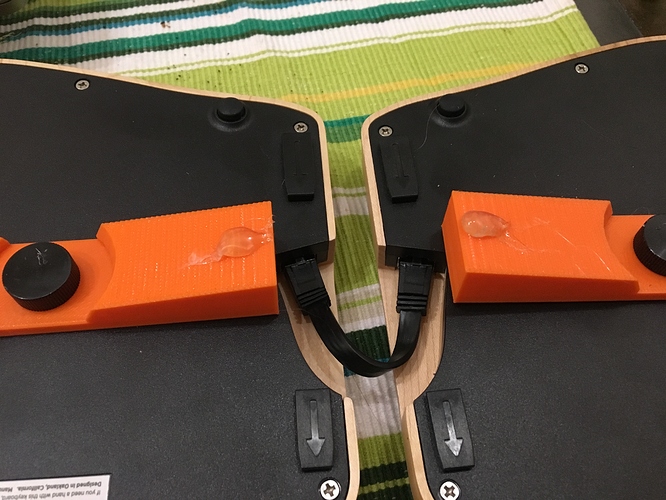 Okay, if anyone wants to make one of their own, I have the files up for download at https://www.thingiverse.com/thing:2803754

It shouldn’t be too hard to adapt this to a wooden schematic for those who prefer to just cut $3 worth of wood instead of extruding a bunch of hot plastic for two hours.

The problem with that design is that you end up with only three feet per half instead of four. While this is stable for any load that’s centred within the triangle formed by the feet, your hands will probably end up resting on or near the front edge of the keyboard, meaning it may unexpectedly tilt forwards.

If the octopus feet are too large for you, you could try fixing a 2cm-thick block of a softer material to the bottom of your tented centre bar. This is not 100% correct, as the outside feet are not all the same distance away from the centre and so there will be a very slight twisting moment - however if you use a soft material (such as a cardboard box) the block should be able to absorb the imperfection without stressing the keyboard.

See Custom Mounts - What are your ideas?

Well, I’ve been using these for a few hours now and haven’t had any problems with instability.

Thanks for sharing. A colleague printed me a pair over the weekend and they work perfectly.

I’m curious how far we could take this method. How steep of an angle will work with this type of stand?

I am also curious about the limits of using the center mount alone. I know that it is a standard camera mount, but I’m curious how well it will be supported if I just use a camera tripod as my keyboard stand. Is it sufficiently supported under the keyboard so that the plastic wont warp, or do I need some kind of support to make sure there isn’t too much torque on the plastic?

It might sound funny but with my Ergodox I went to the Dollar Store and bought some 1" rubber door stops and stuck them on with Velcro.

If I were smart i’d have tried that first.

I’m probably going to target something closer to 2" myself, but that is a fantastic solution.

Thank you for suggesting it.