it appears that the stands provided with the model 01 are the same. i have tried to match up the arms on each stand so that they are symmetric but when i put them on so that the arms that were the same are now at the same angle, the keyboard doesn’t seem to sit the same way. are my eyes deceiving me? maybe i’m thinking about this incorrectly. i assumed that if one stand has it’s leg to the top left, then the corresponding leg on the other mount should be pointing to the top left.

are the stands symmetric in this way? how do others get their keyboards so that the angles are mirrored?

one thing i have noticed with the stands is that they have a little notch on the inner circle, but not sure what that signifies.

one thing i have noticed with the stands is that they have a little notch on the inner circle, but not sure what that signifies.

That’s actually to aid assembly at the factory. I’d asked for a different mark inside, but the request got lost in translation.

Because the stands are identical and we don’t want the feet to hit each other when the two halves of the keyboard are close to each other, they’re not symmetrical, but are offset by…22.5? degrees? It’s late and my math is a little fuzzy.

You can use the assembly notch to get the stands lined up. You want it in the mirror-image location on the other side, rather than the same location.

the way I reason with the notches is to flip the halves so that they are touching on the edges near the number keys and then I make the notches line up on the same degree of the circle.

OMG I THOUGHT I WAS GOING CRAZY!!! thank you. i just, i dunno, i am sorry that i underestimated your genius forethought. i mean, i thought it was something that was screwed up but it does all make sense now.

how is the offset implemented? i know it’s working that way now that i am seeing it but i don’t see how you managed it.

the plane of the top side is at an angle aligned at the edge of a gear tooth, rather than the center.

I’m pretty proud of the design concept. There are some tweaks i might make to the actual implementation if i ever get a do-over.

ok, i don’t quite understand that but i know it works. it’s some over my head math business but it is amazing.

Ok I see what you did here. It’s a subtl thing but very amazing. Worth pride.

I’m had some difficulty following this discussion, but I eventually got it working, though more through playing with it.

For me, if I flip the keyboard over on my lap, so that the number keys are away from my body closest to my knees, then the right stand’s notch is at approximately 40 degrees, and the left stand’s notch is at approximately 220 degrees (note, for both of these I’m putting 0 at the “top” of the circle closest to my knees). The suggestion in the manual that you don’t tighten the screws all the way and you fiddle with the stand position while it’s resting on the table helped me find a stable position.

I had a similar problem and found this to be confusing. I’m still not sure if the two stands are identical or not. I got it to work based on mruhlen’s instructions, but I think this picture might help: 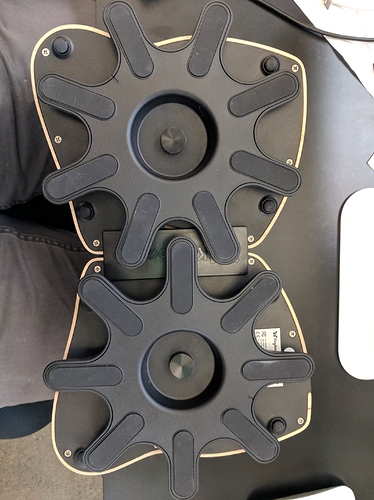 Also just to help this thread show up in the search I initially tried, which was “bar stands”, I want to make sure there’s a comment with both the word bar and the word stands.

(They are. We only have one set of injection molds.)

Also OMG folks, use the stands. After a few weeks of using the keyboard without stands I had gotten used to the layout and enjoyed the programmability but still found it overall a tad uncomfortable. With the stands it feels GREAT.

They are the same but I’m not sure it’s guaranteed that the notches are in the same spot.

It is guaranteed. The notch is part of the injection mold.

I just want come back to this thread and post a comment saying how nice this keyboard feels with the stands set up every time I sit down at my desk.

You can use the assembly notch to get the stands lined up. You want it in the mirror-image location on the other side, rather than the same location.

Hi Jesse. I was wondering what the notches are in aid of and came across this thread. It is still not clear to me how to use the notches to get the stands in a correct stable position. I am using the angled center bar to keep the halves together and understand the need for the 1/16th of a circle offset to avoid the two central legs from colliding, but the notches are not mirror imaged in any way that I can see: 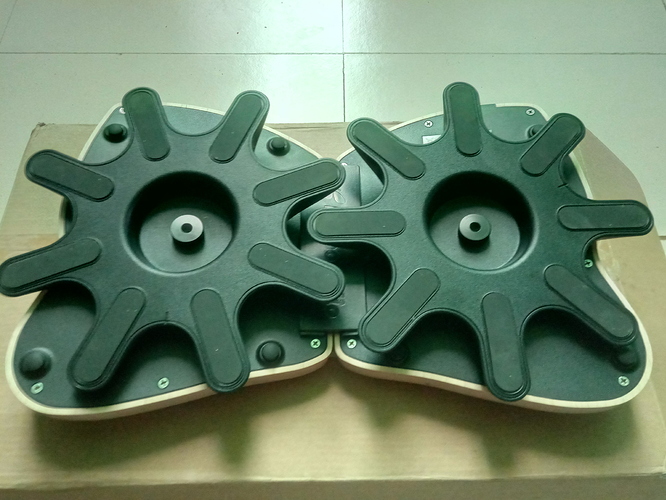 Maybe such a setup is guaranteed not to be stable assuming a flat table? I realize that using the stands when all legs aren’t firmly on the surface is liable to cause structural stress and hence damage to them over prolonged usage.

I don’t see any mention of the notches in the quickstart guide that came with my keyboard and hope I haven’t missed anything. Clear notch-based instructions (both here for now and in future versions of the quickstart guide) to get the two halves aligned stably and symmetrically in 3D with all the feet firmly on the surface, especially when using the angled center bar, would be much appreciated!

On my board, I use the stands as well, but not the bar. I found the bar basically destabilized things, and the stands were quite stable on their own. The bar seems good when not using the stands, though.

As far as the notch, it seemed to me that both of the stands have the notch at the same angular position relative to the slope. If you want to mirror their slopes, you will need to rotate the two stands an equal amount, but in opposite directions. Since the notch isn’t parallel to the angle of the slope, it won’t be a mirror image on the bottom, in terms of the notches.

For what it’s worth, if you are holding the stands upside-down, with the thinnest side facing you, it seems that the notches point to about 4 o’clock. To have a mirrored setup with the slopes facing up and towards the middle, as I’m using, the notches are facing 2 o’clock (left) and 6 o’clock (right), which is consistent with a “2 hour” rotation in equal, but opposite directions from the base angle.

As far as the notch, it seemed to me that both of the stands have the notch at the same angular position relative to the slope. If you want to mirror their slopes, you will need to rotate the two stands an equal amount, but in opposite directions. Since the notch isn’t parallel to the angle of the slope, it won’t be a mirror image on the bottom, in terms of the notches.

That’s correct. The stands are not mirror images of each other. They’re identical. I’m a little sad we didn’t manage to get the factory to add the alignment marker we wanted them to, but it wasn’t to be.

So where exactly is the thinnest part of the wedge? I gather it’s not exactly half-way between the two thinnest legs. Is it ⅓ of the way between them? I gather that’s how the mirrored-slope-but-legs-don’t-intersect trick works. I can’t figure out which of the two thinnest is thinner, though. Let’s call them 1 clockwise from the indicator notch and 2 clockwise from it (when a stand is looked at upside down).

One way to more easily visualize the slope angle is to flip over the two stands and place them top-side-down on the table.