A possible fix for wobbly stands

I got my Model 01 last week and immediately tried using the octopus stands, as I’m used to using a Kinesis Advantage (split keyboard). I found one of the stands to be fairly stable (not rock solid, but about as good as you could hope from plastic), but the other one seems to not be balanced, which means when I put any weight on the keyboard, it rocks back and forwards.

Only one of these is like this, and when I tried swapping which hand it was attached to, the issue remained with the stand, not the keyboard.

Is there anything I can do to improve matters? Is this a common/known issue? 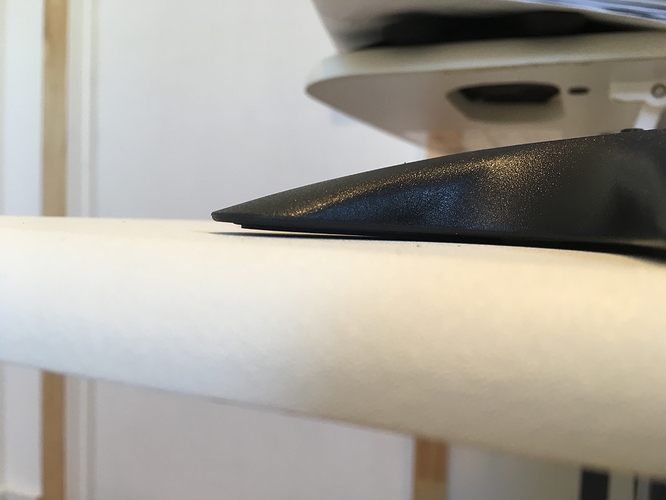 Mine isn’t quite level either. Was living with it to see if it stopped annoying me for the moment.

This is a known issue which I have also encountered. It was mentioned in the backer update two months ago: http://blog.keyboard.io/post/168350141319/day-907-update-on-wood-suppliers-and-mp1-field 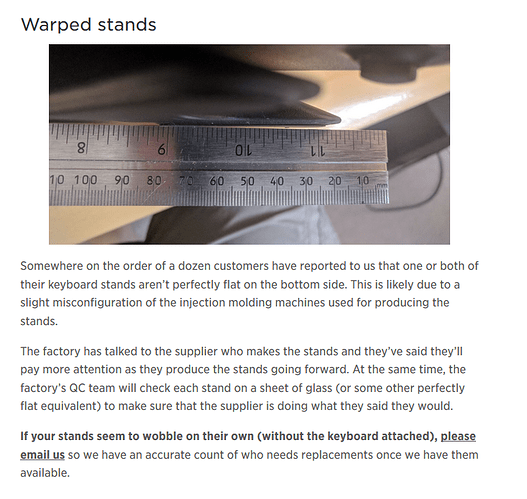 Like they said, if you email them they will put you on a list to send you a fixed stand once the production calms down a bit

Thanks! I’ll send an email now.

In the meantime, I highly recommend trying out a 3d printed stand as described here: A better tented stand

Good opportunity to get to know your local maker space

Just an update, I sent an email to help@keyboard.io with subject line “Warped Model 01 stand” and Jesse got back to me with a solution very quickly. I won’t detail it here as I’m sure he wants to keep accurate numbers on how many people this is affecting, but suffice it to say it was about 10 minutes of easy work to fix it, and you can use the tools that are provided with your keyboard.

The stands are now pretty stable when sitting by themselves. I still get a little flex in the stand unit if I rest my wrist on the bottom of the keyboard when trying to press the fn button, but it is much better. I think this flex is more inherent to the stand design, as the weight is over the edge of the flat part of the top of the stand.

What is this magic fix??? I got no such suggestions… maybe I will go pester Jesse some more

Well, now that the cat’s out of the bag, this is what we’ve been sending people:

We think that we may have figured out the cause of the stand warping issue. It appears to be an assembly issue, rather than a manufacturing issue.

To the best of our understanding, the factory simply overtightened the screws that hold the stands together.

The solution is to use the screwdriver that came with your Model 01 to puncture the rubber pads on the underside of the stand and loosen the screws of any affected legs.

https://youtu.be/RaJp6vC2VRI is a video demonstrating the procedure.

I’d love to know if it works for you and what we can do to make the process clearer.

So far, it looks like the process doesn’t ruin the rubber pads, though we’re happy to send you replacements if you need them.

So far, it looks like the process doesn’t ruin the rubber pads, though we’re happy to send you replacements if you need them.

Yep, I have a small dot in the bottom of each one that I punctured, but it is really minor.

I just did the same thing and it makes a huge difference. I am curious though, for some of them it required about a half rotation and now the screw appears to be bulging the rubber out. This doesn’t seem to be effecting the stability detrimentally, but I was curious if this is normal

Only half a rotation shouldn’t have gotten the screw up that far. the rubber may just have been distorted a little bit by the process of puncturing it.

I gave the fix a try, since one of my stands is like this; weight of my hand resting on the keyboard is enough to tilt its back legs off the table. It doesn’t bother me personally since I prefer not using the stands, but I was curious.

Results: doesn’t seem to have made much difference one way or the other, sorry - the stand is still prone to tipping over after tweaking multiple screws. I noticed that if I loosen one leg up too much, the top and bottom flex away from each other on their own. I guess the bottom half wants to be flat but the top’s pulling it out of shape. Maybe sticking something inbetween as a spacer would work around it, but I don’t have anything to hand that wouldn’t fall out.

In every case we’ve tested or heard about (save one), the top and bottom are both flat when separated. Do note that you need to be pressing above the rubber pads, not on the very outside edges.

It may be that the fix won’t work in all cases.

The one case where this fix didn’t work (before yours) is a case where the stand had been mis-assembled. The two notches on the bottom side weren’t aligned. Is that the case with your bad stand?

Unfortunately that’s not the problem here, they’re both lined up.

After the screw manipulation, if you hold the bad stand up against a good stand, how many of the legs are curved away? Just one or more than one? If it’s only one, is it the thinnest of 'em?

I’m going to try a daub of dark-colored caulking to hide the small puncture.

The thin leg clockwise from the notch appears to stick up noticeably more than the adjacent ones, though it’s still only a fraction of a mm. I’ve noticed that even pressing down on the curve between the two thin legs is enough to cause wobble - the other stand won’t budge if I use the same amount of force on it there.

One one stand, I found that reinserting the central screw and leaving it slightly loose fixed the problem. My speculation is that if the central screw is too tight, or, perhaps, inserted at a slight angle, that can be enough to make one or more of the arms wobble.

This fix didn’t work on the other stand, though.

The thin leg clockwise from the notch appears to stick up noticeably more than the adjacent ones, though it’s still only a fraction of a mm. I’ve noticed that even pressing down on the curve between the two thin legs is enough to cause wobble - the other stand won’t budge if I use the same amount of force on it there.

That’s super weird…And yeah, You…may have bad plastics. If you’re bored and curious and want to try full disassembly of the bad stand, that may tell us more about what’s going on.

(But it’s by no means required)