What are the best layout hacks you’ve found so far? Do you use the palm keys to press enter? What does chording both shift keys together do for you?

For me it has to be the Space Cadet plugin. I code a lot and being able to type parentheses-like things easily is a huge help. I have my thumb clusters set up like:

But when I tap the modifier keys in the above they will type:

Holding one shift and tapping the other will therefore give { and } respectively (to answer your last question).

I have my esc and 🦋 keys bound to alt so the thumb clusters plus these index-finger operated alts make it extremely comfortable to both type parens and hold pretty much any modifier combination I use.

Interesting. I currently have similar bindings on my thumb keys but I have one-shot/sticky keys on them to make doing some multi-key keyboard shortcuts easier. I also do a lot of coding and I am finding the brackets ([ ] { }) on the function layer a bit harder to commit to muscle memory… wonder if I should give Space Cadet a try.

I gave SpaceCadet a try earlier on but found myself constantly typing brackets by mistake. So I’ve decided to first get used to the keyboard before trying that again.

Here’s my sketch if anyone wants to give it a try.

The main layout tweaks I’ve done (and which I’ve had in place since I first got my model 01):

Reason being that I press space and tab a lot more than whatever the default keys were in those positions, and that’s where my thumbs naturally lie.

This made a lot more logical sense to me, and also makes programming way more comfortable.

I’ve also tweaked the NumLock layer to give it a somewhat more sensible (to me) punctuation layout, and I’ve colored the keys to match their functional group; white for alphanumeric, yellow for whitespace, pink for punctuation, light-blue for cursor keys, and a few other colors for the various other sets of functionality (mousekeys, media control, etc.)

Here’s my base layer: 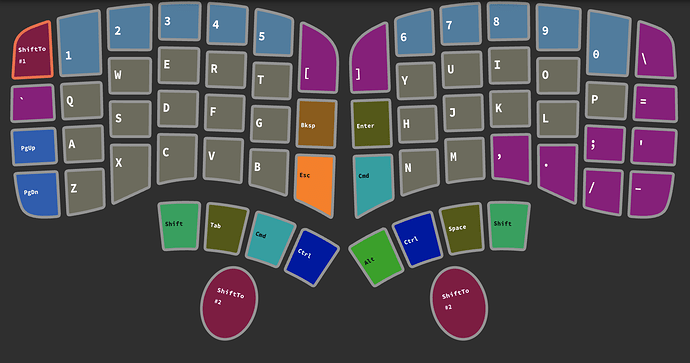 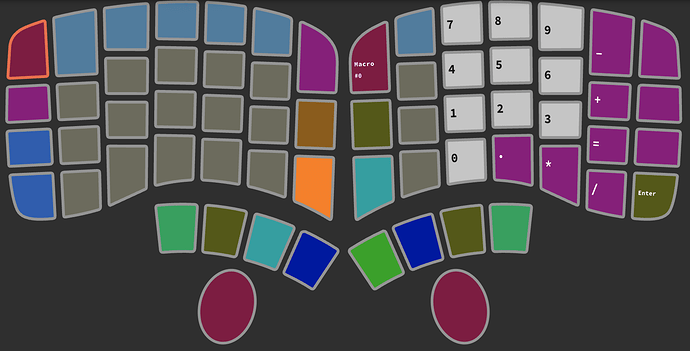 and my Fun layer: 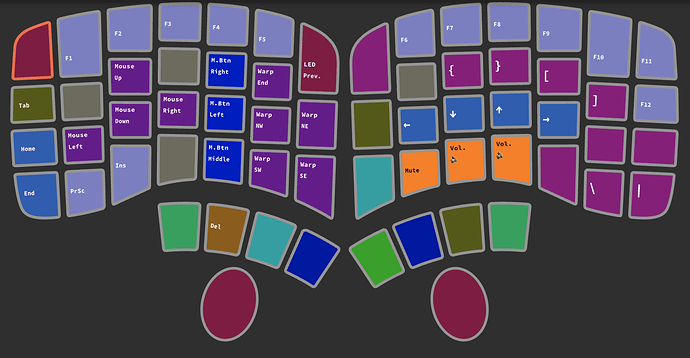