I’ve spent my evening putting together a Model 01 support package for the Arduino IDE. If this works correctly, it should mean that getting from zero to working Model 01 firmware will be a lot simpler going forward.

Sooo… does that work for anybody?

crashing. I’ll look at this tomorrow, if I can. Schedule’s a bit tight, so realistically it may be Thursday.

No worries. (This was the thing I was alluding to when I mentioned trying to put together something to save the newbies from having to touch git

Tried this under both Linux and Windows 8.1, with a fresh install of Arduino, both worked flawlessly, except for one tiny thing: I didn’t have a Settings menu, it was called Preferences, but otherwise following the steps got me a compiled firmware (I didn’t flash, but I assume that would have worked too).

So cool! No hardware to test with, but loaded it up and snooped through examples. So if I want Colemak I would edit this Model01-Firmware sketch and flash that, correct?

So cool! No hardware to test with, but loaded it up and snooped through examples. So if I want Colemak I would edit this Model01-Firmware sketch and flash that, correct?

Though, I heard @jesse talk about non-QWERTY layouts on IRC the other day, so it may become even easier than that. Nevertheless, to begin your customization journey, the Model01-Firmware sketch is the perfect start indeed.

except for one tiny thing: I didn’t have a Settings menu, it was called Preferences

Funny story. My menu item is called ‘Preferences’, too. I just wrote the wrong thing.

When I opened the zip file on my mac it extracted a file named “Arduino.app” which I infer is the IDE, but would want to clarify in the docs. I will try on a PC another time.

When I launched the app it opened a default sketch. when I dismissed it the app closed. Will need to document a note about ignoring the default sketch.

The “Preferences” menu option is under the Arduino menu, not File.

Paste this URL into the 'Additional Board Manager URLs` box: https://raw.githubusercontent.com/keyboardio/boardsmanager/master/package_keyboardio_index.json

Type ‘Keyboardio’ into the search box.

the “Install” button doesn’t show up until you click on the “keyboardio by Keyboardio” info in the results block, which is not obviously clickable.

Need a note to close the Boards Manager window

Open the ‘Tools’ menu, click on ‘Board’ and then click on ‘Keyboardio Model 01’ – You may have to scroll through a long list of other boards to get there.

My menu had two entries for “Board: Arduino/Genuine Uno >” which appear to have identical lists.

Click the ‘->’ Menu to compile the default firmware and flash it to your keyboard. (You will have to hold down the Prog key on your keyboard while clicking in order to enable reprogramming.)

While holding down the prog key, click on the right arrow in the sketch window menu bar to compile compile and install.

At this point I had a failure, and now I am ignoring dinner guests. 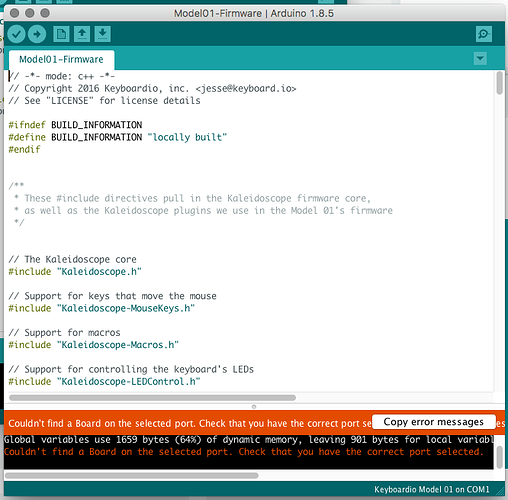 Oh! there may be a missing step. You may have to select a serial port under the tools menu.

Yup! Selected the port, and the new firmware flashed. Now to customize it.

All re-customized. It’s worth noting that the port had to be re-selected when I renamed the sketch *.orig and started working in a copy.

I’m making notes here as much for my own reference later as for feedback to you.

Don’t have a keyboard yet so couldn’t test the final compile/flash step but everything else worked great.

Though for me the Preferences menu was under “Arduino” instead of “File”. I’m running Mac OS X High Sierra - Arduino v1.8.5

Took about 2 minutes including installing Arduino. Nicely commented!
To nitpick the instructions, ‘->’ is not a menu, but a toolbar button.

What kind of computer were you using? I don’t think anyone who uses a pc has commented yet. Thanks!

but I only have easy access to macs. If you have a chance, please let me know if the Windows instructions are similar enough to what I’ve written that people who aren’t familiar with Arduinos and are new to programming would be able to follow them. I have plans to go through the process on a PC to test them, but it’s going to be a few days before I can coordinate that.

Not having a keyboard, I couldn’t try to flash it, but following the instructions allowed me to compile without any errors or anything. Looks good, very simple for someone to follow. Thanks for putting it together!

Thanks! Hope you get yours soon!

Do you have ideas about what you would like to customize? I want to make sure I’m documenting the things people want to know.

Nothing real defined in my mind as far as customization plans. I’m sure I’ll be playing with the key map a bit, but I’m not sure where I’ll be moving everything quite yet.

There were some plugins that looked interesting (some of the “stock” plugins). There was also a Wave Pool plugin that I’d like to try out (New plugin: Water / Wavepool LED effect). I think what might be helpful would be a basic overview on how to include/exclude plugins in the sketch. There may already be some of that documentation out there, but I haven’t been motivated to really look that deep since I can’t actually use anything quite yet (though very anxious to start tinkering!).