I got a little tired of editing the keyboard layouts, and thought it would be better to do it programmatically. Linux’s XKB system has a slightly clunky but programmable tool to generate PDFs of whatever combination of keyboard layout and keymap you want (this is what normally comes up when you choose “keyboard viewer” in the settings).

I found a kinesis layout description and updated it to approximate the Model01. It isn’t as pretty as Jesse’s SVGs, or even the keyboard editor. But it does have the advantage that I can run off a batch of keyboard layouts with one bash script.

The source files are on github for your enjoyment (caveat: still very much a work in progress) https://github.com/andrewgdotcom/keyboardio-xkb

And here is some sample output for the default layout using Linux US_ASCII (should be the same on other OSes): 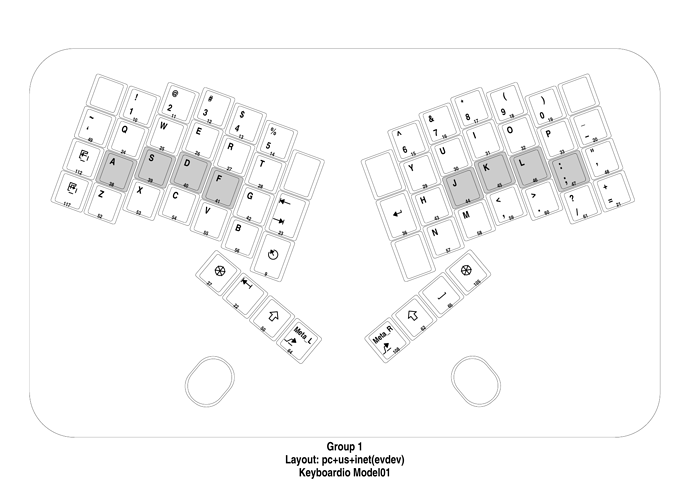 (EDIT: I just noticed I have the modifiers ordered the way I like them, rather than the default. Fixed in the source.)

Note for non-linux people: Super=Windows and Meta=Alt. I think it came up that way due to the order in which aliases are defined in XKB. Note also that the wheel like symbol is apparently a symbol for Control (who knew?). I enabled this (also the symbols for Escape etc.) because the text “Control_L” spilled over the edges of the keys.

I prefer XKCD and XFCE

I’ve now updated the scripts to use ultra-simple config files for generating printable layouts. The default config file is this:

That’s it! Just a list of the keys in a sensible order. (The names used are X’s internal representation of the keys - I’ve provided a file containing an annotated list of them)

I have broken out a template file containing the above vector graphic outline and the placement of the internal scancodes (R0C0 etc), which is independent of firmware configuration. From this template, the layout config files as above, and X’s standard keymap library, we can produce layout diagrams showing how the keyboardio will behave under each combination of firmware and software key mappings.

TODO: handle multiple layers efficiently. Currently you have to define a separate config file for each layer…