Still to be implemented:

Hello @algernon slight nitpicking here but for aesthetics sake can you adjust the central two keys of the left thumb cluster to be more in the curve? The right one is OK but I’m not sufficiently conversant with KLE nuances to do the changes myself. Thanks!

for aesthetics sake can you adjust the central two keys of the left thumb cluster to be more in the curve?

Heh, up until now, I didn’t even notice. Fixed it - at least I hope so.

Since I finally got my Keyboardio and had a chance to see how my fingers work with it, I designed my first draft of the layout I’m looking at using. It’s a version of Programmer’s Dvorak with some fun stuff mixed in.

MehA/B/C/D and Hyper keys are all modifier combos for fancy things I do with Alfred, Keyboard Maestro, and a few other apps
Moom is a window placement app I use
“Move 2 left/Right Display” is a macro to use Moom to move a window over to other displays
=> is just a quick macro to put in fat arrows for programming

Probably several changes to come as I get used to things, plus I’m taking this opportunity to try and learn Dvorak, so if that doesn’t go well over the next few weeks I will probably be recreating this with QWERTY.

I also have lots of thoughts coming for lighting effects that I am just putting off until I get used to programming the keyboard itself a little bit.

Comments on this are welcome as I’m just getting started here!

It’s been a while since your post here, but this is close to what I’m looking for. Would you mind, and is there a way you can share a link so I can fork your layout?
KEYMAPS defs too, would be greatly appreciated!

"Want punctuation on thumb keys - the (m)s stand for macros, they’re not yet functional but the intention is to do the punctuation, a space and a one shot shift, "
I’m interested how to do it (I tried some stuffs without success). I created a topic on it in Plugins section How to create a macro like typing Space then OSM(LeftShift) with OneShot plugin

All of this was super helpful to me, thanks! I posted my config info here:

I use a Mac laptop, with a Japanese keyboard, so I’m not only getting used to US key positioning on the Model 01, but also just the general difference of having thumb keys. On Japanese 'boards, we have colon as shift semicolon, " as shift 2, @ as its own key, and so on. I tried using Chrysalis to configure, but it’s mid-development, and in the end I just decided to give compiling a go over the weekend. Thanks for the good info in the github and this forum. I put my Arduino sketch (.ino file) a…

Is a keyboard-layout-editor.com layout for the default QWERTY layout available somewhere?

It seems like a useful tool for displaying layouts, but I suspect many people would start with a default layout as a starting point and make a few minor modifications from there. I just want a nice way to show an alternate layout of thumb keys, it would be nice not to have to specify all the other default keys and their Fn alternatives etc!

Well, since I’ve received my M01, I’ve been doing fiddling and finally have reached a layout that’s more or less going to remain constant. Notes:

I think there’s some great functionality left to get out of some remapping but they’ll always adhere to these general ideas for ergonomics.

This is my layout, fully one-handed, inspired by the FrogPad layout and adapted to German and French use. I am using it on a Mac, so it is designed in a way that I can easily use shortcuts such as ⌘ + ⇥ to jump between windows or ⌘ + space to get to Spotlight instead of having to move my hand to the trackpad. Oh yes, and since my surname is annoying to type with such a “frogboardio” layout, it has a Macro with my surname. 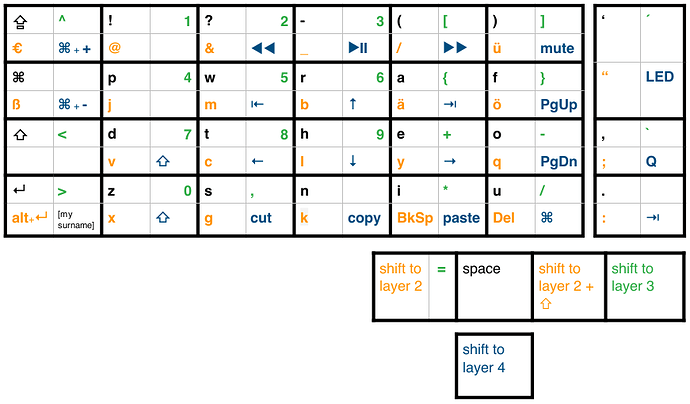 (Sorry for the bulky design, was too lazy to translate it into the layout editor…)

OK! I posted earlier today about the layout I was working on, but then saw some really cool ideas and went back to the drawing board. Mostly I’m concerned with the thumb buttons, but am also concerned the placement of a few other things. Anyway, my layout.

I’m on a mac and got used to my mac special keys on the left. I never use the command/etc on the right side, and instead of learning too much new stuff at once, I moved all those keys to the left thumb. Ctrl, Otion, Command, Shift.

In programming I do a ton of “=” and “-” and “_”, but the standard layout kind of banishes those keys to an odd place. Moving them to the thumb might be too much, but we’ll see.

I moved the arrow keys so they have the inverted T in the home row, which means the curly bracket gets bumped to the left. I have no desire to relearn arrows. I saw that one row layout on some 60% mech keyboards, and apparently popular with vim? Just too many years to switch now.

The only other mod currently is pgdn turns into Shift in function. This makes navigating and selecting text much easier. In mac, command and option let you make line and word boundary cursor movements. Since the left thumb is busy and you’re already holding down fn, using the pinky to hold down “shift” to toggle selecting text is easy to understand (for me).

Still trying it out. Already thinking Tab isn’t good there because I keep hitting it by mistake, but really prefer moving bksp to the function layer because I’d be hitting that by mistake all the time instead.

Also really need an alternate way to do parens. They’re pretty common. Have tried space cadet on me mech keyboard and removed it because I would hit that by accident more than on purpose.

Next up is figuring out how to physically place the keyboard. So far nothing has felt quite “right”, although there’s a lot to adjust to, obviously. I’m thinking it might be better to start flat and add the feet later, but trial and error.

I also switched to Colemak a few weeks ago so I’ve been seriously blowing up my productivity, but I’ve enjoyed the input method rabbit hole I’ve gone down.

I’ll save my .ino on my messy github some day.

Hey @platypuxbepo thank you for your share. I’m looking for a good bépo layout. Like yours. But I checked you github and you didn’t put it. Could you please ? Do you still maintain it ?
I love the fact that – if I well understood – I can say to my OS that my keyboard should be in bépo and that the keyboardio will still work with the wanted configuration. Because I am on a laptop + Model01. And I want to don’t have to switch the layout of the laptop when my Model01 isn’t connected.

Could you also explain to me what to do to import your configuration please ? Just change the .ino and flash the keyboard ??

Thanks a lot bro !

If you don’t get any satisfaction, you could try https://github.com/andrewgdotcom/Model01-Firmware - it should work out of the box with your BÉPO OS layout. Feedback welcome!

Thank you very much for your post ! That’s kind of you.
I was beginning to desperate to have one day a proper bépo layout on my Model01 …!
I will try it and come back to you. Hope that you fixed the removed /avr. Because I tried to install the bépo version of C3ltic but there was problems with it. Or I did something wrong

(I spend more than 20 hours with no results…)
We stay in touch,
Thanks !

The default layout should work the same as Celtic’s under BÉPO OS. I try to keep up to date with master, but it is a little behind at the moment. If there are any fatal errors, let me know ASAP and I’ll fix them.

I’m sharing my current layout in bépo. Some keys are blank because I bought an ergonomic touchpad and I don’t know yet where I will set it (on right thumb or on index) and I will remove 2 keys to be more accessible.

Do not hesitate to ask why I set the different key notably on homerow, fn, numpad, thumb keys, there is a reason for each.

Maybe I missed something, but it looks like you have only one AltGr key, which is accessed by holding R. This appears to leave you with no way to type a ® character.

Thank you for the feedback. You are right. I did not realize I can’t do ® with my layout (honestly I don’t care). I made it with my old keyboard. But I realized I can’t do also Alt+U.

Hi All! I’ve got a few weeks using this layout and it’s still a work in progress but I’m enjoying it so far. Let me know what you think and any suggestions!

noteable aspects:
-mirrorred MTGAP/BEAKL layout for 30 alpha keys, wanted space on lefthand and opposite /.;,
-oneshot thumb modifiers
-homerow QuKeys modifiers and layers
-not using palm keys because I initially found the inward pronation uncomfortable compared to homerow access
-nav layer is nice for traversing text files
-punctuation layer
-mouse layer with clipboard shortcuts, plan to add a few more like ‘cut line’
-not sure what to do with butterfly key yet 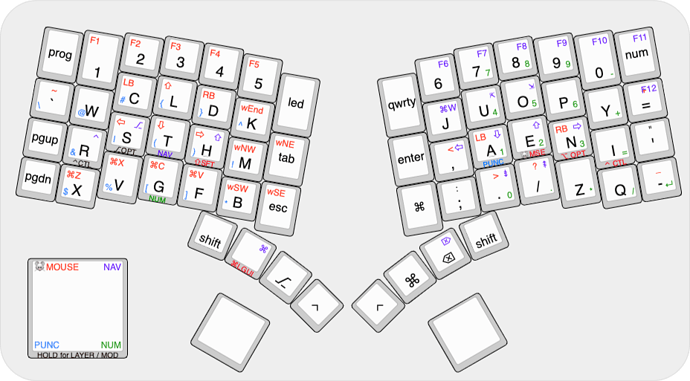 I’m always delighted to see someone using home-row Qukeys. Has that been working well for you so far?