Minimizing finger stretching a.k.a. my Atreus has too many keys

Everyone is different and I am as different as they come. Years of poor ergonomic choices have left me with a lot of tendonitis and just possibly some arthritis. In brief, my fingers don’t like to stretch. I got the Atreus because I thought the columnar layout would help, and it does! But that’s just a start.

this thread helped me realize just how far I could take this thing, which it turns out is pretty far. My goal became to see if I could keep my fingers on the home columns, and in the home row +/- 1 row. My thumbs also don’t want to move very much, so I want to restrict each to the inner two keys on the bottom row.

So here’s where I’m at today (the rate of change is high).

Level 0 is alpha keys, with the shift/ctrl/option/command modifiers in the home row as “modifier when held, normal key otherwise.” I heavily modified Colemak, taking Mod DH several steps farther so that only two letters (G and M) require a finger to move outside of the home columns, and those just a one-column jog. Home left thumb is backspace, home right thumb is space, and one in gets you Esc and Return, respectively.

So far this experiment is going pretty well. My fingers don’t move much at all, which if I stick with this should eventually buy me a lot of speed. I get to leverage muscle memory for shift/ctrl/option (just had to learn not move vertically off of home), but using my index finger for command is taking some retraining. Using a level shift for all punctuation feels surprisingly natural, with some adjustments. I’m using my thumbs a lot more, which may come back to bite me. If my tendonitis doesn’t let me use my thumbs this way then the experiment may be over before it’s really begun.

And so it turns out I’m only using 32 of the 44 Atreus keys. What to do with the unused keys? They were bugging me, and confusing my fingers. So I took them out, and my son 3D printed me some covers for the empty slots, easily removed for when I change my mind again tomorrow. 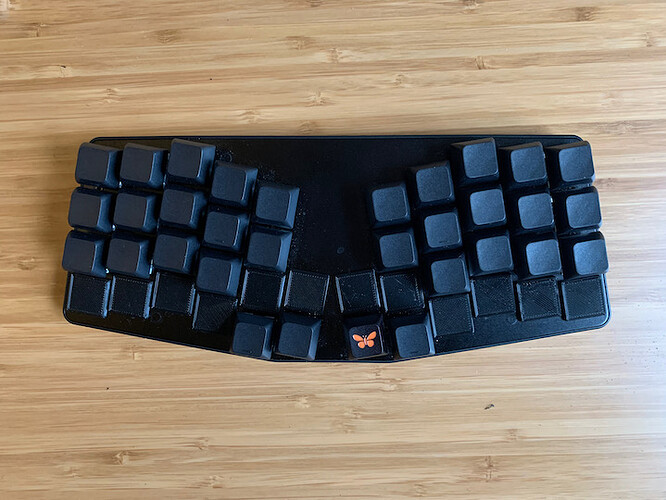 Your layout and your keyboard look so cool! I love how all alphas are separate from other keys. But I have two questions for you:

Thanks for sharing this, @billba! It’s really quite cool.

Seriously cool, thank you for sharing!

I’m noticing a couple of omissions in your layout, like the curly braces, and the plus sign. Do you find those unnecessary for what you’re doing? Or are they deeper in your configuration?

Also, would your son be willing to share the design of those covers? My housemate has one, I might ask him to print them for me to do the same!

I can’t see the plus sign in the layout, but I guess you’re saying it’s just left as Shift-Equals like on a standard keyboard? Maybe it’s the same for the curly braces; Shift-SquareBrackets?

Glad to see another Dvorak + TypeMatrix user. I loved that keyboard, except for the unbalanced layout. Notice the TM has Shift plus 5 keys of the left, and Shift plus 6 keys on the right. For some reason that drove me crazy. Must be my OCD.

Thank you Bill for sharing your layout. I translated my Ergodox layout to my Atreus, but it never felt 100% comfortable like it did on the Ergodox. Somehow I never got past that hurdle. Your layout now seems so obvious. I’ve adapted it for Dvorak and BEAKL15, and already it feels a lot better typing on the Atreus.

One would think the modifiers on the home row is a obvious choice for 40% keyboards (I even did that on my Ergodox), yet you hardly ever see it being used. It frees up so many keys that could be used for other things, like long term layer switching (eg: a game layer, dedicated Photoshop layer etc).

Correct, you just shift as on a normal keyboard!

Thanks for the write-up. Love seeing how creative people get with these tiny keyboards!

I’m seeing a lot of layouts lately that utilize the home-row mods (here’s also a recent dive in on the topic: A guide to home row mods).

How do you feel about loosing key-repeat on the mod-tap keys though?
I’m interested to try out a similar layout, however I always avoid using mod-taps for keys I that tend to repeat (e.g. HJKL for Vim, BackSpace, WASD).

QMK has a setting allowing you to “force” key repeat by double-tapping it, but it’s still not ideal. Chrysalis/Kaleidoscope doesn’t have anything like this AFAIK.

It’s been a few weeks now and I mostly don’t miss repeating keys, so I guess I don’t use them that much?

Just as an update, I’m really enjoying this layout! It is feeling increasingly natural.

Thing I was missing: Instant access to the volume keys (mute, up, down) so I added the three leftmost keys back to the bottom row. In level 1 they are media keys (pause/prev, prev, next)

Thing I really like: having three out of the four arrow keys in the home row.

Not quite right: my K and J placement are hard to reach. I may bring back the two top row innermost keys and shuffle things around a bit.

I’m also toying with adding a caps lock key to the bottom right as it can get fussy to have to switch back and forth between shift keys when MAKING A POINT.

For turning on and off capslock I use double tapping in shift, like in the phone. It is very intuitive.

How is the experience going so far?

Could you please share the json file of your beakl layout? I’m playing with beakl a bit and find this setup interesting

Sure, see attached. The layers are defined as follows:

This time round I don’t use a dedicated Symbol layer like I normally do. Use layer 2 and Shifted keys to get access to all symbols on the number row etc.