Talk about the Atreus?

I’m really on the fence about it. Great price of course but maybe it would be better to wait for Model 100, that sort of thing… Anyway some discussion points…

Could anyone comment on the location of the Ctrl and Alt keys? It looks like eg Space and Fun are easy to reach but for Alt you need to move your whole hand up and twist. I assume it’s to keep the size down, I’m just wondering what it’s like to use in practice? (BTW I watched the promo video for some ideas on how it’s used and the person there is using the ring or middle finger for Enter…?)

Are backtick and backslash intended to be thumb or finger keys?

So if you mean the Atreus 2, people won’t get them till May at the earliest. So you won’t get a lot of comments on what they’re like in practice yet. 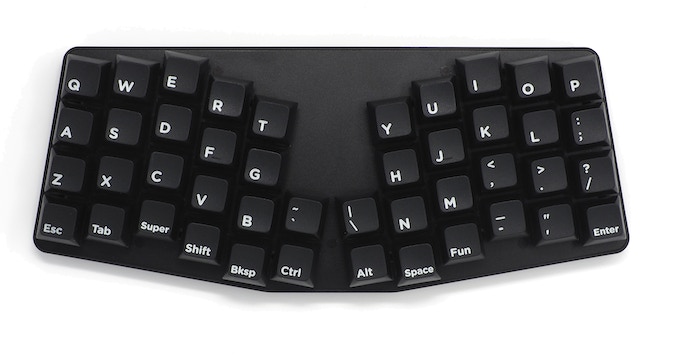 It looks like Ctrl and Alt are perfect to use your thumb for - why would you need to move your hand up and twist?

I cut out the papercraft edition to test it out - you should try it! It’s here:

Here are some pics: 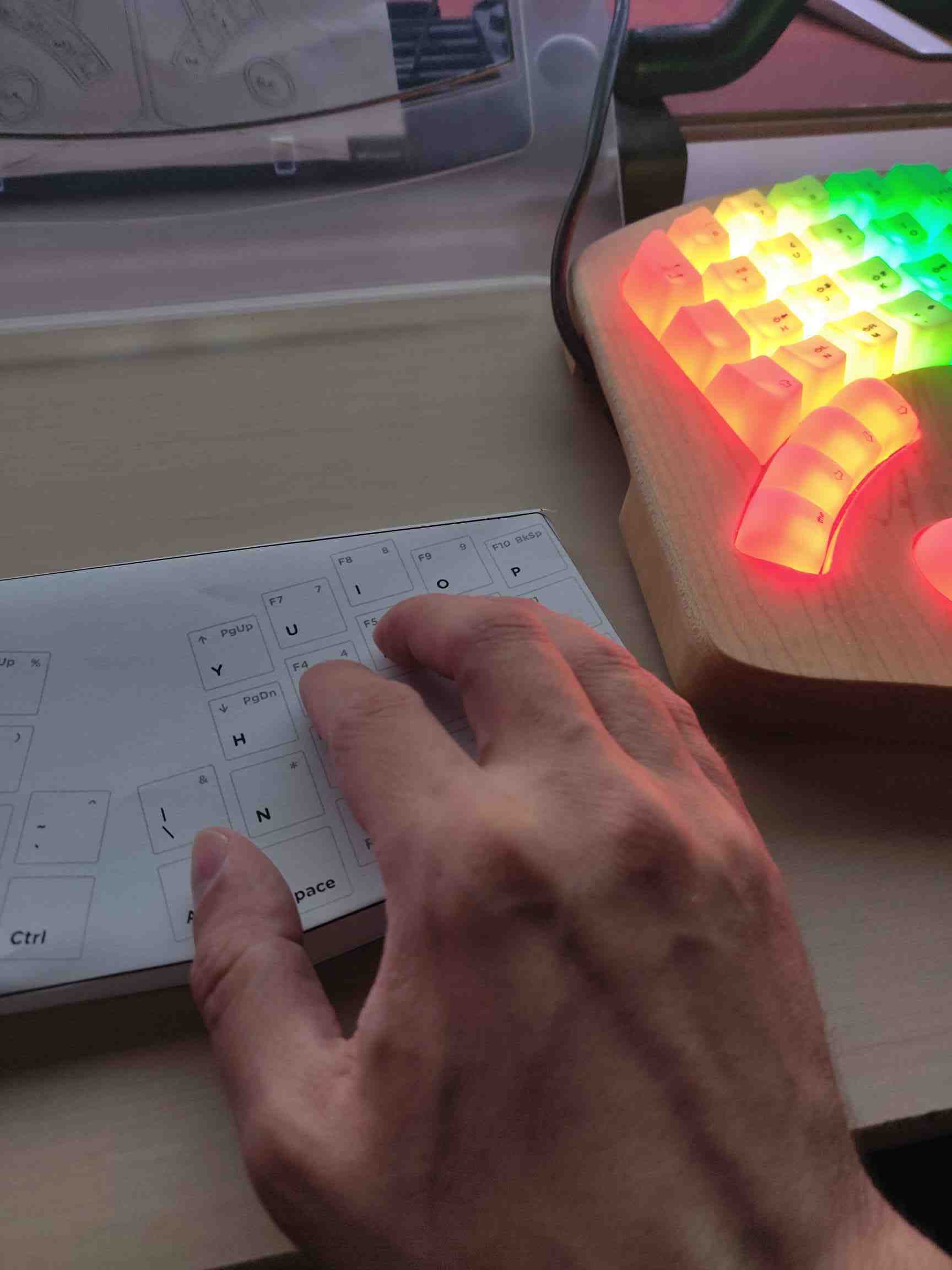 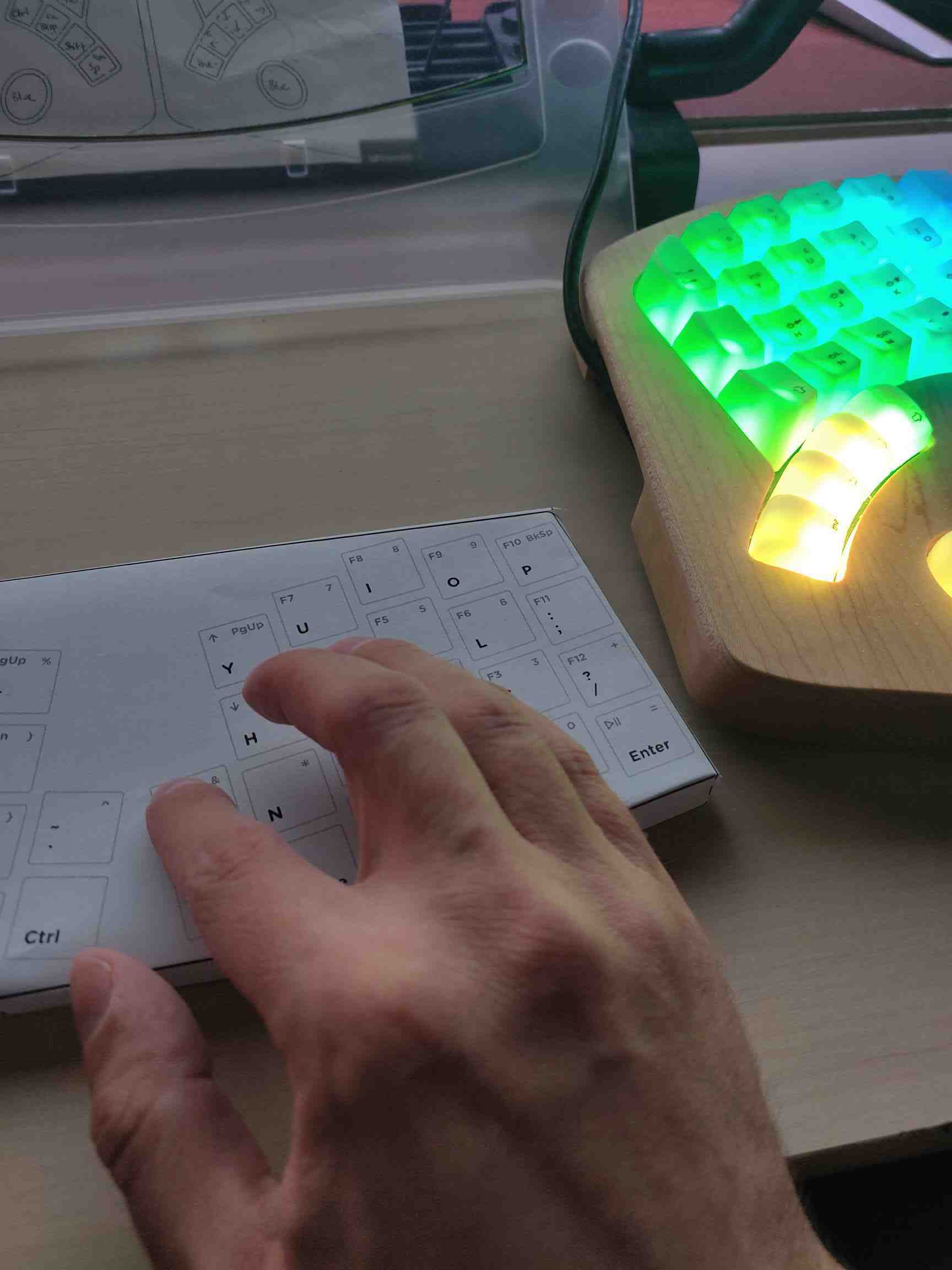 Backtick and backslash seem to work better as index finger keys for me.

In that top pic my right fingers are on the home row and my right thumb is on alt. In the bottom pic I moved my index finger to backslash.

Also of note, you can always rearrange the layout. The keycaps are XDA, so uniform profile, and they’re all the same size, so you can move them around on the keyboard too. And the Keyboardio Atreus has MX-style switches, so it’s very easy to source pretty much any kind of keycap set you like (blanks included).

Which is to say, you’re not bound to the default layout, and can tweak it to your liking.

I’ve got the previous Atreus that I built from a kit, the keys you’re asking about are easy to hit with your thumbs. I suspect the 2 additional keys will end up being finger keys for me.

I typically use the side of my pinky fingers to hit the bottom outside corner keys. Hyphen, quote, tab and super (using the posted layout) are the most uncomfortable to reach - I was initially using my thumb, but started developing RSI so have switched to using fingers for those keys.

Thanks all for the comments. The paper printout is helpful! Ctrl/Alt with the thumb needs only a slight hand movement and I don’t have a problem with Cmd(Super) and hyphen on the thumb. Tab and quotes I’m not sure about at all. But at any rate I’d put hyphen and quotes on a layer. Backtick and backslash I feel would be finger if a character and thumb if layer toggle. That’s “on paper” of course

One unexpected thing is that my pinky naturally wants to be a row lower. But the keys can just be remapped… hm, I need to work on my keymap more, still got a few days to decide.

Another unexpected thing is that I’m realizing why I have so much trouble with a standard keyboard. I can type quite quickly but a typing instructor would scream if they saw what I do…

I found this site which can be used to compare layouts! https://jhelvy.shinyapps.io/splitkbcompare/ Pretty cool. Here is the Atreus (42-key version) overlaid with the Model 01. I hadn’t realized before that the columns in the Model 01 are not parallel. 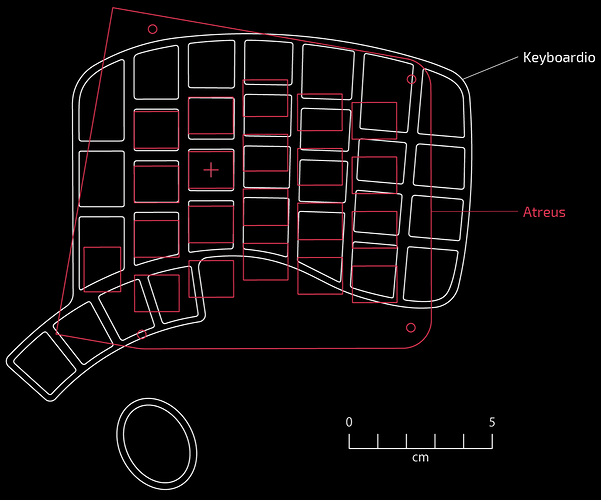 I wish we could shift the Atreus up a little in that overlay so the top rows would line up.

Move it down? If you move it up the home rows don’t match up. I think what you’re asking could be done by downloading each as an SVG and loading them into Inkscape. Maybe I’ll give it a try.

If I understand correctly, that would mean the home rows are not aligned? e.g. I’ve shaded the home keys here - 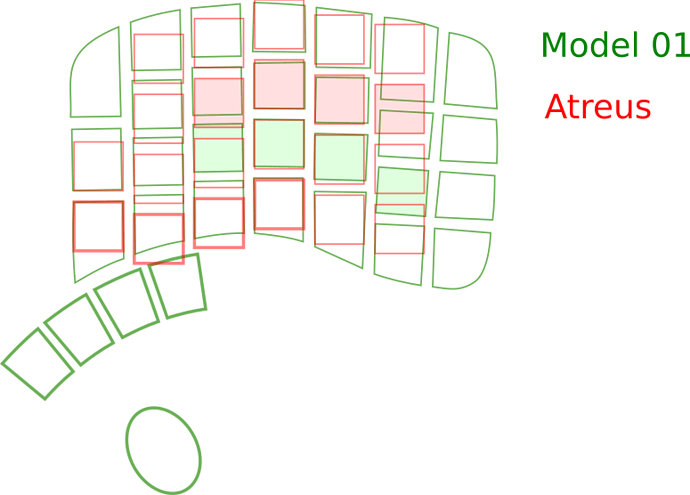 I was thinking more like this, the home rows line up and the thumb keys more or less do (in heavier outline) - 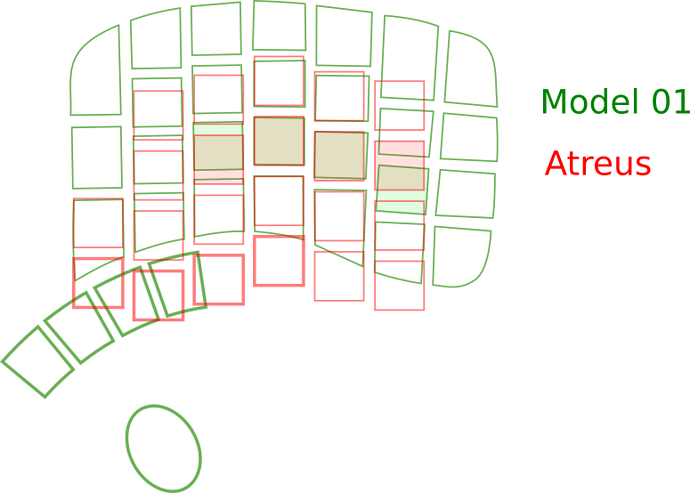 It certainly shows how different the design of the two keyboards is!

Awesome, thanks for realigning them!

So with the paper model Atreus 2, I can only comfortably reach the first three keys you’ve outlined with my thumb - the fourth doesn’t really work as a thumb key.

I wonder how well the Atreus 2 would work if you used the third row down as the home row, like with the Model01?

I think both those comparisons are helpful - the bottom one compares how far away the keys are from the default home rows, holding them constant, while the top one compares the actual shape of the keyboards.

“I wonder how well the Atreus 2 would work if you used the third row down as the home row, like with the Model01?”

And make the top row Nums? Maybe with a few dual use keys -

Wonder what that would be like to type on…

Oh I forgot backspace. I suppose the question of whether layer keys are better on the thumbs or pinkies would come down to personal preference? On paper (

) I prefer thumbs. That’s the beauty - or bane? - of programmable KBs I guess.

I can confirm that the 4th key in on the Atreus does NOT work well as a thumb key (at least on Atreus 1) - trying to use it as such caused RSI in my thumb.

You inspired me to make an Atreus 2 layout that does not use the three keys on the far left and far right of the bottom row - look!

Check out my Atreus 2 layout! My Setup

I made an Atreus 2 layout! The goal here was to put all the important editing keys (Home, End, Space, Enter, Delete, Backspace) on the main layer while not using the three keys in each of the far corners (so it’s a 38-key layout). numpad, Tab, Esc on the left side of Layer 1 (red) Fkeys on the left side of Layer 2 (green) arrows and most main punctuation on the right of Layer 1 other punctuation, braces, brackets, angle brackets on the right of Layer 2 you get to Layer 3 (blue) by pressing bot…

I notice on the shop that customers are asked to choose switches during purchase. I already have c38 each of kailh box red and box navy from my minidox, which is also hot-swap. So one option is to buy an Atreus sans switch and make one (or both) of my existing sets up to the necessary number. Presumably there are others with their own switches already or who simply don’t like those on offer who would also prefer to buy the atreus without any preinstalled?

From the Kailh range I would actually choose the speed silver which is available as a loose item from Keyboardio if it were also offered as a factory option in the Atreus build. Having tried both the aforementioned sets, it turns out I am more of a floaty, light linear person.

Will any of these two switch options (silver, or none) be added to the web order system?

Further thought: it is a bit of a shame Keyboardio did not choose to make this board specifically for the MX low profile (or Kailh’s rip-off they call ‘choc v2’). These switches would seem more in keeping with the implicit reason behind this board to provide existing Keyboardio users with a portable alternative to their flagship keyboards.

Interesting - am I reading it correctly that the blue layer is accessed by holding both red and green layer switch keys? Maybe you use the Win key more than I do, but I’m surprised to see it on home row. I’d be more likely to put in on one of the far corners, and hit it with the side of my pinky. I’ve noticed I tend to do that with the bottom corner keys on my Model 01 as well, rather than curling my pinky so tightly.