Please excuse the poor photo… Pixel 7 is usually better. Keyboard’s back together - Not taking it apart for another shot.

When trying to diagnose a dead key issue, I’d suggest doing some board diagnostics before going off and ordering new keyswitches.

My Model 01 (which my son uses exclusively) started acting up. The w key stopped working entirely. We bought new switches and installed it. After which the w, q and ` keys all stopped working. Since they are all on the same row, it made sense to take a look at the board traces.

Based on some other topics here, I made sure that the left contact of all the keyswitches on row 1 were common. In order to do that, I had to solder on the yellow wires seen here. Theory being that de-soldering and soldering in the new switch caused that trace to be cut somehow. Once I did that, the q and ` key worked again, but still no love from w.

It’s likely that the initial problem was that the right contact of the keyswitch wasn’t connected to the column via a diode anymore. The original switch was probably fine (still have it, and it reliably makes electrical contact when pressed). It’s a board level trace issue that caused the w key to stop working. Soldered in a diode (1N4148) that my amp building friend had lying about. After that, wwwwwweeeee!!

I’ll leave it to the reader to decide how much my son’s enthused keyboard gaming was responsible for the issue. The w key likely saw a lot of action for certain games. Then again, these are supposed to be reliable keyboards. The damage from a simple desolder shows how fragile the boards really are. 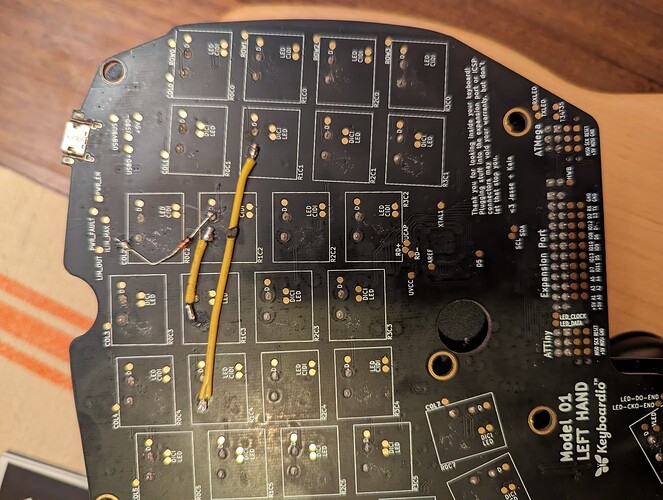