New Atreus user: what keystroke combination do I need for the keys in orange?

Help and Getting Started
question
dpapathanasiou (Denis Papathanasiou) October 8, 2020, 11:32am #1

I’m trying to decipher this chart.

I get “Function” for the keys in blue (numbers, etc.), but how about the orange?

For example, up or down arrow, Del, Home, etc. 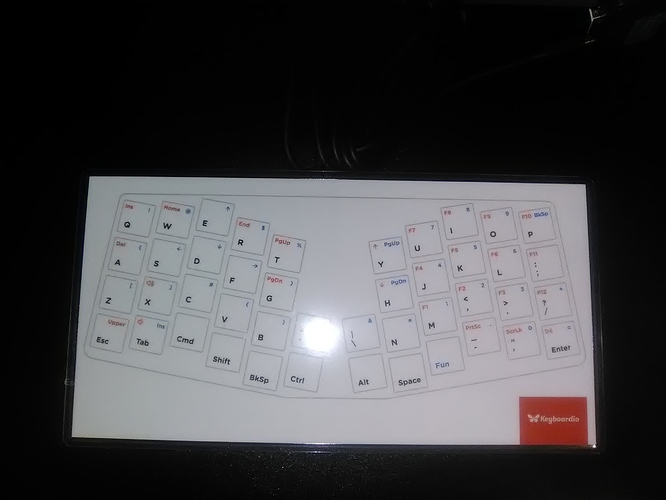 The “Upper” in my chart is actually orange, which is why I couldn’t make the connection.

Also, it seems that fn + esc is a toggle: once to enable those keys, and again to regular mode, is that correct?

‘Upper’ is orange, but ‘Fun’ is blue. This is consistent, but confusing - it’s the color of the destination layer.

I think you’re right about the toggle. I’m unclear how it works internally, but I believe that’s what it does. I’ve messed with my keyboard a bit (mapped Fun to OSL(1) rather than ShiftToLayer, which I think is the default) so I can’t be sure. But if that’s how it works for you, that’s probably what it does!

In fact, when you are in the upper layer fn and esc move back to the base layer. You don’t have to press them together. You only need to press one of the key.

I feel like I’m missing something. Is there a place that describes this operation? I went through the material in the box and read everything on the Atreus site a couple times but I never found these basic concepts.

So, it appears that Fun is a temporary modifier- while you hold it down you get the upper-right characters on the laminated sheet (most of which are blue).

If, while you’re holding Fun, you hit Esc, you have now toggled into Upper. The upper “layer”? You can release Fun and Esc and now the upper-left characters on the laminated sheet are active (all in red).

To exit the Upper layer, you tap either Esc or Fun.

Cool. But where is this explained? How did I miss it?

The Fun key is ShiftToLayer(FUN) on the base layer. The Upper key (on the FUN layer) is LockLayer(UPPER). Both of those keys on the UPPER layer are mapped to MoveToLayer(QWERTY), which deactivates all layers except QWERTY (the base layer).

@Dirty_Proton, you’ve got it right. I’m not sure where there are docs on this, but you’ve accurately described how it works.

It’s not clearly explained I believe unless you go in the firmware code as it is when you receive your keyboard ie : https://github.com/keyboardio/Kaleidoscope/blob/master/examples/Devices/Keyboardio/Atreus/Atreus.ino

and read documentation on kaleidoscope https://kaleidoscope.readthedocs.io/en/latest/

This is exactly what I was looking for. I described the actions empirically, but I really appreciate the more programmatic explanation, merlin. Where did you get this from?

This probably answers my question posed to merlin. Firmware documentation is where I can see the more programmatic description of keyboard operation. Thanks!

@rloic already provided a link to the sketch, but I’ll answer your other question.

The distinction matters because the layer stack is index-ordered. Layer N+1 is always above (and when active, its non-transparent keys will be masking) Layer N, regardless of the order in which they were activated. So, if both layers 2 and 3 are active, pressing LockLayer(2) will deactivate layer 2, but would only affect the mapping of keys that are transparent on layer 3. Pressing LockLayer(2) again would re-activate layer 2, but layer 3 will still be the top layer. Pressing MoveToLayer(2), however, will also deactivate layer 3, and will result in layer 2 being active regardless of its previous status.

Where did you get this from?

If you search the forum, there are many posts where people asked similar questions about the Model01. There isn’t really a central place where everything is laid out clearly and explained, sadly. You just have to sort of go through the threads, see what’s obsolete and what isn’t, try things out, and ask questions. That’s programming for you…

Thanks everyone for all the replies!

I had posed the same question by email to “help@”, and they replied with this link:

Typing on the Atreus

The Atreus uses a "layer" system to fit all the keys you would find on a regular keyboard into just 44 keys.     The Home layer We've placed the most common keys on the primary layer. Most of the rest of the keys you'd reach for are located...

Jesse, thank you! I wish I had more time to play around and investigate, but life is busy so this quick explainer is such a big help.

One more question- what is the Super key for?

It’s the Windows key. The “super” label is what Linux calls it.

Many thanks, bitzbyte363. So, now I’m embarrassed that I didn’t just figure that out. I guess I assumed it was unique to keyboard.io, not something that googling would find. But I should have just googled “super key” before asking. Learning experience!