Rats. So sorry. I was on my phone in a waiting room and trying to be “helpful”

Hey all, thanks everyone for taking the time and making so much effort, not only on the research but also on creating the images of the key layouts in place!

I like where the thread is going with the idea of ‘futuristic’, ‘minimal’ and stuff that would generally look good with the LEDs backlit, so I’ll continue to follow it. I just want to make clear that I’ve read the discourse before my comment, otherwise it will look like I’m trying to derail it.

However, to throw a spanner in the works, when I joined the thread I saw the Hieroglyphics and loved that. Reminded me of the weird place Lost went with it’s mix of sci-fi. It’s a great mix of old, new, (to most people) meaningless, and thoroughly interesting glyphs.

I understand if others don’t like it, but I didn’t see any discussion on it after @to1ne suggested it. Are people against it?

There’s a PDF on the Egyptian Hieroglyphics as it’s in the Unicode standard.

Just want to give it a chance

I’m all for more options! Are there enough hieroglyphs that are not overly complex in there? The laser cutting will probably make the more complex symbols unusable.

Ah valid point, they might lack a decent subset, (there’s a lot of similar looking animals and people in there!) and a few of the symbols are pretty complex. 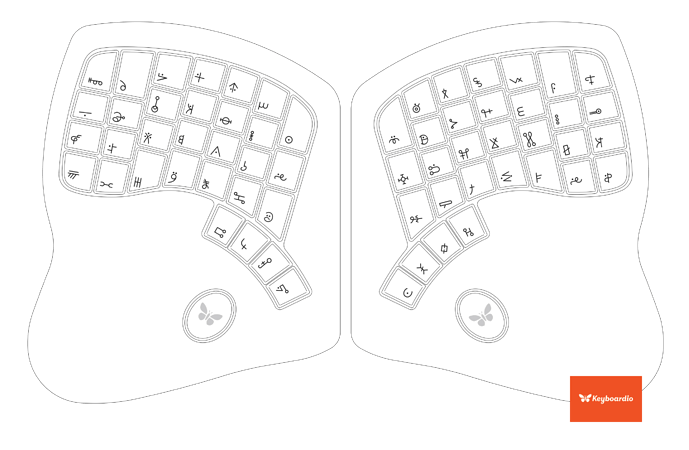 Font size and weight is the same, because the font I use only supports this weight. Tried increasing the size too, but that did not look good enough, so I stayed with what I originally had. As far as I see, there are no duplicate symbols anymore, and I’m pretty happy with how it turned out.

Oops. Here’s a version with a white background: 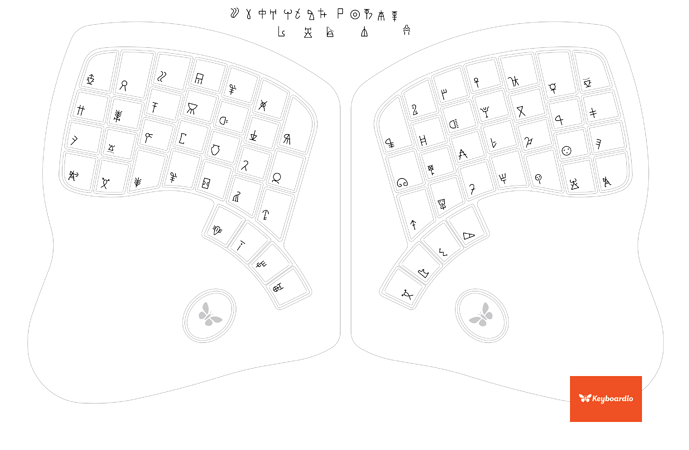 Edit: I’m adding a second version, with bolder versions of the Linear A symbols. I did this in a quick and dirty way that doesn’t work so well for all the symbols, but should give a better idea of what it might look like. I used the symbols from the Unicode document, and imported them into Inkscape using Poppler, then did some editing of the SVG by hand to get them bolder. If we decide we like Linear A best (because it’s undeciphered and cultural-appropriation-risk-free), I would go to the trouble of making a new version of each symbol in order to both make them look just right (square, bevel, rounded joins, et cetera) and to make sure there are no copyright issues, but I don’t think it’s worth the trouble unless it gets chosen. 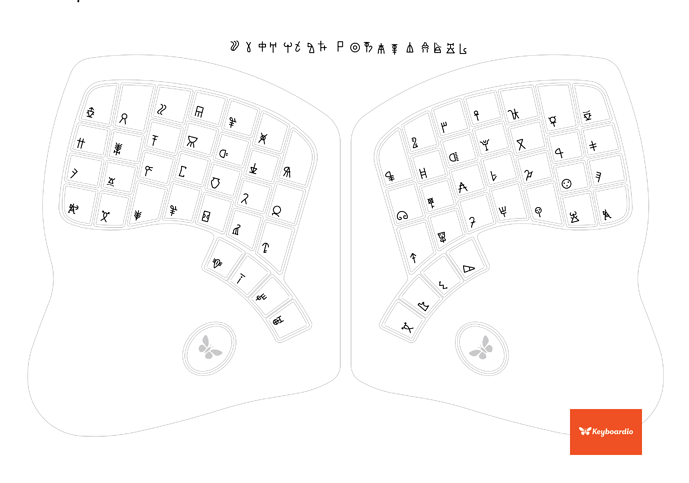 . I was firmly in the Bamum camp, but now you’ve made me question that. The Linear A looks really nice! If these are not too complex for the laser process I think I’m now going to vote for Linear A.

The Linear B looks really nice!

Just making sure: the one I posted is Linear A, not B.

Until the injection molds and issue with the LEDs are sorted out, the schedule isn’t fixed. Also, the way it’s going to work, we think is that every keyboard will be assembled with QWERTY caps and every preorder will get a free second set of caps.

The QWERTY legends likely need to be finalized within a week or two, but that’s almost completely done. The first samples (with some small errors) should arrive at our place today.

The QWERTY legends likely need to be finalized within a week or two, but that’s almost completely done.

Printing-wise, I think that’s it. And yes, when there’s news to report, you’ll have it.

That’s what I understood, but I meant other things too. It’s influencing decisions (at least for me!) on preferences for key placement, potentially including stuff that may be printed. (This isn’t related to the runic stuff of course, sorry!)

Since Christmas is only two and a half weeks away, how about we put up a poll between Bauman, Linear A, and Mende? These three seem like the favourites so far, and I’d limit the poll to a finite number of proposals. I’d also close the poll on the 19th, that gives us plenty of time to vote, and to improve the proposals still. And there’ll be about a week between closing the polls and Christmas, so J&K can say the final word, and the winning proposal can be further fine tuned.

What do you think? Any objections?

I guess I’d better get my less-rough version of the Linear A layout done soon!

Can we get a brief history of the font (again pls)? I recall reading on the other thread that one of these is some ancient language and another one is still in use by some tribe somewhere on this planet.

Also if @jesse could chime and and let us know which would (in theory) look best laser cut, and I’m not saying subjective best, but quality of the lasering.

Accidentally posted this in the wrong thread, oops:

Linear A is an ancient script, Bamum is a script that was used in Cameroon, but apparently hasn’t been used since the 30s, Kikakui is by a very small amount of people in Sierra Leone.

I’m still working on a better version of the Linear A layout, but the symbols won’t be radically different. I’ll probably try replacing some of the more complex ones with simpler ones, and I might make some adjustments to the line width and the corner roundness. If I get it done in the next day or two, I’ll post it here.

I recommend making this line bold, larger font, I had to read it twice to check I understood the way I was supposed to vote.

" the higher the number, the more you like the proposal. "

To be more specific about the history:

Linear A is an ancient (c. 2500 BCE) Minoan (Greek) script, which is famously still undeciphered. It’s related to Linear B, a later script used by Mycenaeans, which was deciphered in the mid-twentieth century.

Bamum script was invented by the king of the Bamum people in western Cameroon in the late nineteenth and early twentieth century. It started as a pictographic system, and became more like a syllabary, but fell out of use by the 1930s. There may be a project that is currently working to revive the Bamum script, but their website hasn’t been updated in almost three years.

Mende Kikakui script was invented by an Islamic scholar in Sierra Leone for the Mende language in the early twentieth century. Like Bamum, it’s a syllabary for an agglutinative language. Kikakui was largely replaced by a Latin-based alphabet, but is still in use by ~500 people.

Symbolically, each of these works well for the Keyboardio Model 01, for those of us who care about such things. The two modern ones are new inventions for a type of language that is not best served by an alphabet, and the ancient one is undeciphered, which fits the idea behind the Runic keycaps well.

On another note, there is the question of cultural appropriation, which we haven’t discussed much, but which might be an issue for some of us when it comes to Mende & Bamum (everyone who knew the ancient Minoan script has been dead for more than 3000 years, though).