Personally I just want runes with no other symbols or hints indicating what the keys additional functionality will do (e.g. no arrows for the directional keys, runes on the modifier keys instead of ctrl/alt/cmd/option/windows). As of course all of these will be adjustable in the firmware.

While I’m of course not familiar with how the Model 01 will work, I’m someone who is comfortable pulling up a diagram on one of my monitors to get the hang of it, so the runes with lack of additional indicators will not slow me down too much.

I also like how when I inevitably decide to change some behavior I don’t have to worry about my keycaps no longer lining up with their functionality, as they never matched it in the first place and aren’t boring like blanks.

Edit Another idea I had is instead of just one rune centered per keycap like as is normal, perhaps wrapping the entire keycap over the edges with multiple “rune phrases”. (Edit) @jesse pointed out the obvious that this would be (near) impossible for the units we will be receiving.

Edit Specified that I’d like modifier keys have runes on them and no other labels.

Edit The only key I don’t mind taking from the original layout is the butterfly key. Keep that as it’s branding for a product I support.

Edit As for the actual design, I don’t have much input and believe everyone else will pick some solid options.

While wrapping the keycap is a pattern would look gorgeous, it’s outside our technical capabilities. The laser engraver can only do the top surface of the keycap.

As folks are thinking about layout, keep in mind that the LED is in the lower left corner of the key, so the light will be brightest there.

Using unicode might make it easier to generate the layouts, though I’m not sure. If it is the case, then I think some of the alchemical symbols might be a good idea?

Other interesting-looking (at least to me) sets include:
Old Permic
Palmyrene
Samaritan

The full set of code pages makes for some interesting reading and viewing though.

For actually generating what gets engraved on the keys, we’re going to need to end up with a PDF. While it’s a heck of a lot easier if we have a known-good typeface and Unicode code points, it’s not a strict requirement. 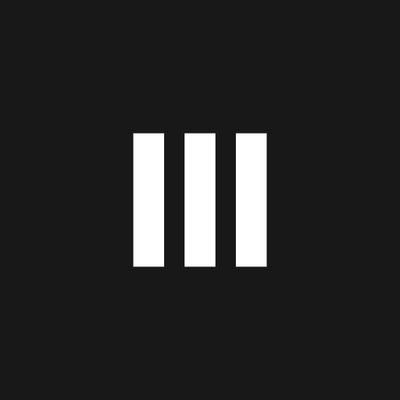 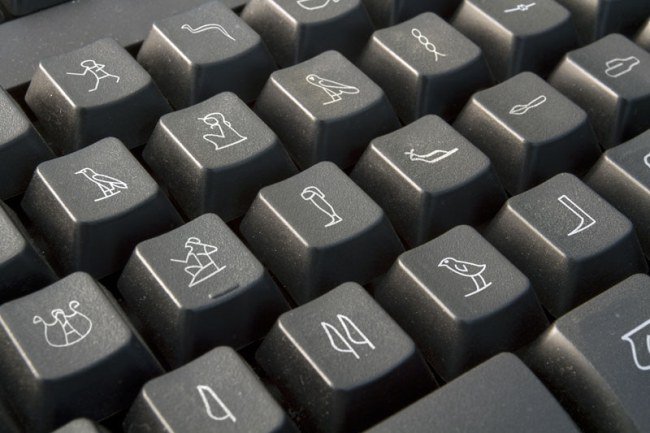 This is maybe a really n00b question, but if I understand it correctly, the laser engraving will burn through the paint, allowing the light to shine through the legend?

A few other, interesting set of runes to consider:

If I’m allowed a suggestion, I’d use runes of a made-up language. Not hieroglyphs, or hebrew, or chinese symbols. Thankfully, there is no shortage of made up languages, and some of them even have their own symbols, and of those, some even have a large following (hi, Tengwar!).

For what its worth, I tried using a Tengwar font with KLE, but it did not work out too well, I could not get the font to load at all. So I’m taking another route, and am building a tool (see below) that will be able to fill a keymap SVG like this: 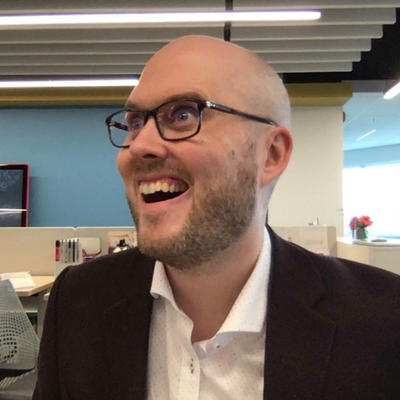 @algernoone @keyboardio No IDs added to the SVG yet, wanted to get your 2 cents on new SVG first: arleym.com/keyboardio/ https://t.co/9152vTPCKN 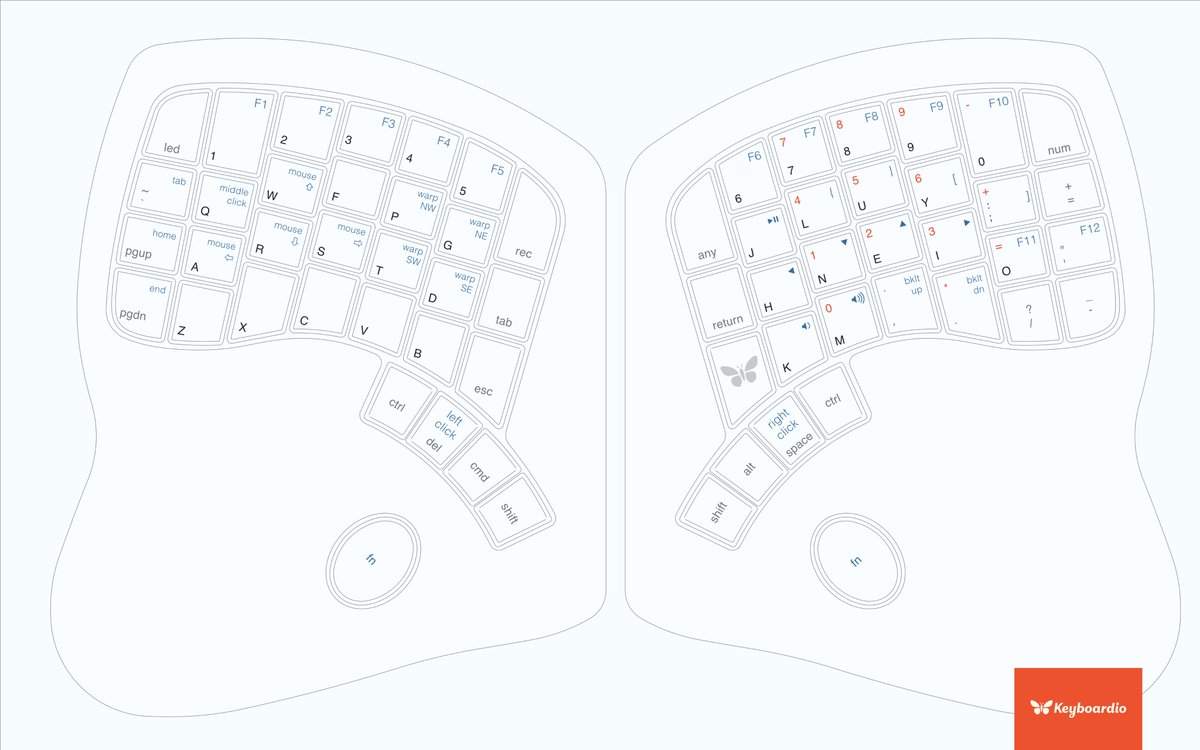 This means that you can write a small layout file, and the tool will create an SVG out of it, using the font of your choosing. Nicer layout than what KLE provides, and likely less issues when using a custom font.

The tool itself will be on GitHub, and have other functionality too. There is no code yet, but I plan to change that in the next couple of days. This may help with the Runic design, hopefully.

I see. It sounds like most here are interested in runic or conscript keycaps purely for their aesthetic appeal. Fair enough, and I’ll admit that that’s one reason that I’d like non-Latin key caps, too.

However, if Tengwar is a possibility, I have a strong interest in a sensible, efficient layout that would work well with “modern” Tengwar fonts with defined Unicode codepoints (currently “private use” U+E000 to U+E07F, officially roadmapped to U+016080 to U+0160FF).

I would be happy to work out and propose a suitable key layout, but to do this properly (for efficient Tengwar character entry) is not a trivial task — so if the sense here is that runes, or Klingon, or some other script is preferable, I’ll bow out.

I’ll mull this over and do some research as the group works towards a consensus.

I would be happy to work out and propose a suitable key layout, but to do this properly (for efficient Tengwar character entry) is not a trivial task — so if the sense here is that runes, or Klingon, or some other script is preferable, I’ll bow out.

I would be very interested in making it possible to input Tengwar efficiently. If that requires support from the firmware, I’m happy to lend a hand or two.

Mind you, I’m fine with just having random runes too, and that is likely a much easier task to accomplish. But if efficient Tengwar is a possibility, within a reasonable time, and with enough interest, I’ll do everything within my power to make that a reality.

I made this SVG using Sketch app on Mac. If the source file is useful for anyone ping me twitter.com/arleym or arley at mcblain dot ca (see, eh?, heh) SVG itself is linked at http://arleym.com/keyboardio/

Other interesting-looking (at least to me) sets include:
Old Permic
Palmyrene
Samaritan

Nice selection of code pages! I also like Tengwar

Personally I would also like symbols that are as far as possible from any instantly recognizable patterns (hieroglyphs, chinese etc.) as @algernon said. Since these symbols will be used as key legend instead of actual font, and will be lit up with backlight, the shape of each alphabet should be distinct enough one another so as to prevent uniformity.

I remember one person recommended Hymmnos alphabet which I think is very suitable for this kind of legend, like so (top is uppercase, bottom is lowercase): 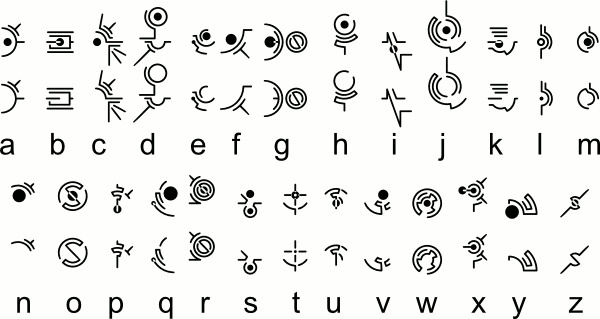 Not too simple, not too complicated.
Each character has a number of thin lines and ample blank spaces, which I think will light up nicely.
More information and font download here.

There are also tons of choices from conlang wikia, though I haven’t checked how many languages have its own alphabets:

If you wish to see your language on this page, please leave a message on this page's Talk Page or an admin's talk page. This is a list of conlangs on this wiki whose creator is still active on the wiki. Abashe, Ahise, Akutirolis, Alemarese, Alitalia,...

For actually inputting interesting scripts, it probably makes sense to fork off some new threads. This one is specifically about a cool-looking, but nonsensical set of key labels

To save people counting, there are 32 keys on half of a Model 01. So we need a set of 32 symbols if we are okay with mirroring one half onto the other or 64 if we want every key to have a unique glyph. Or 59 if we just mirror the thumb keys.

I like Aurebesh, and there have been a few iterations of Hylian that would look good and have more than 32 monographs. However, I suspect all of these could run into copyright issues. Looks like Tengwar has some sort of legal ambiguity around it, as well.

Some of the Hylian iterations have symbols that look too much like their Latin counterpart - not non-sensical enough, I’d say. Which is a pity, because the symbols look pretty otherwise.

Another idea that just came my way: Diablo2 Runes, symbols from Blizzard’s Diablo universe. On this keycap set, there are 30 symbols only, may not be enough. It’s an interesting, non-sensical layout though. Not sure about copyright implications, however.

Copyright issue will be a pain

I’m not sure if any of the aforementioned fictional (man-made) languages can be used without infringing copyright.
Can someone with more knowledge chime in on this matter?

Also, I’ve found a keyboard made by KBTalking which also uses runic legends. It is called the KBTalking Light Eye of Odin. They use some zodiac signs etc. Might be a good starting point to imagine how runic legends will look on a keyboard and when it is lit on

Link here (It’s in mandarin, but the images are all that matters right?

Also, I’m curious @jesse, is this kind of image legend within the realm of possibility on the Model 01?

[details=Spoiler, not sure if this is NSFW (Sorry if it is, I will remove the image if requested)]
anime girl: 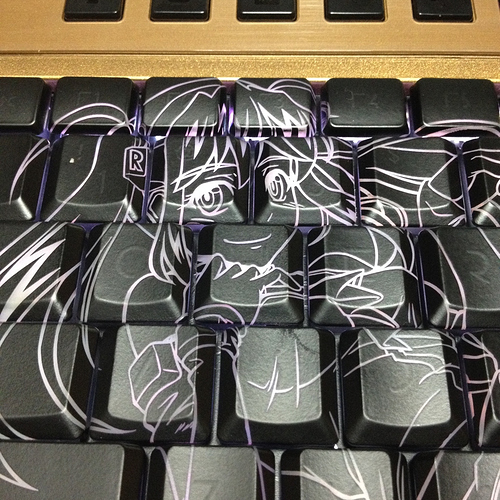 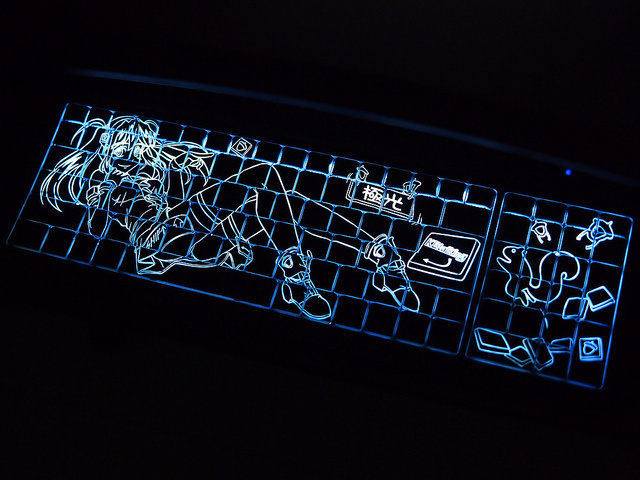 If this is possible, we can create a new thread specifically for an “huge image” legend

@rayzlight, if you wouldn’t mind finding another image showing off full-keyboard legends, that’d be great.

Because of how the laser-engraving works, I’m not confident we can actually get them made with our current vendor. The concept is definitely something to keep in mind for the future, though.