I would like to create a Swedish (and/or Scandinavian) keyboard layout for the Model 01. Anyone else interested in this?

I have no experience in this area at all, but I guess what I would really like is nice Swedish keycaps for the Model 01, but if that is not possible I would at least like a good layout that I can use with black keycaps.

I’ve got some experience with Nordic languages and could assist, I personally use a very customized layout where I can write in any of the Nordic languages but I doubt most would be interested.

The biggest issue is trying to fit all the symbols and agreeing on a method to enter the symbols.

Ideally you want to keep all the special symbols from the US keyboard (’"[{}]-_/;

in addition to ´ ` ˝ ̏^ øæþðöäå and clearly there aren’t enough keys to go around.

Composite key:
You press a composite key, then you press a modifier (like ¨ ) then a letter key (like o) and output is ö

Function key:
You press a function key (like AltGr) and a letter key and the output is the letter like þ

The downside of Composite keys is that it’s three key presses instead of one and it’s very hard to remember which keys are the modifiers, also can require some odd finger movement.

The downside of function keys is that it’s hard to remember which letter key to use because many vowels can have multiple versions (á à ä å), can also require some weird hand movement especially since both keys need to be pressed at the same time.

Dead keys are kind of a compromise, you sacrifice a key for every 2-4 modifiers, you don’t have to hold down anything but you take up more keys than function or composite keys but it’s easy to remember.

I personally prefer a mix of function and dead keys and this is my current layout for the ErgoDox (works for all latin character based languages), in theory you could do the same modifier/deadkey layout on a QWERTY keyboard and it should still work.

Thanks for the input!

The more I read about keyboard layouts the more I realize that I know nothing about this… But I think I do have to have a specific goal. And that will likely be to create a layout that is reasonably close to a “normal” Swedish keyboard. I’m not sure I want to retrain myself completely, e.g. with where the “shift-number” symbols are (i.e. !"#¤%&/()=), but I do want to make the alt-gr symbols easier to reach.

The problem is of course that I want to be able to type prose and do programming with the same layout. And the normal Swedish keyboard layout tends to hide away a lot of the symbols used for programming in hard-to-reach places.

My first venture down the rabbit hole was a long time ago when I had to regularly work with ANSI keyboards which have one less key on them meaning that I was missing a symbol key in all languages that use ISO standard keyboard layouts. Then I got very fed up moving between Danish/Icelandic/German/English because everything moved around so much that it was impossible to remember and programming on those layouts makes some of the symbols horrible to reach.

Hope you find a Swedish layout that works, the starting issue with just using the default firmware in the Model 01 is that it does not have an AltGr key (it only has Alt) so I recommend starting with the thumb layer and adding it.

Well, here is my first draft layout. But as I have come to realize this is probably not going to become a “generic Swedish Layout”, but more my personal layout, with focus on Prose and Programming. Anyway, I guess it could be a starting point for others.

There is quite a lot of “I have no idea where to put these keys, I’ll just drop them somewhere” in here…

There are a lot of things to consider such as if you want custom keyboard layouts in the OS, if you need AltGR, if you want a numpad layer, if you want to use the Fn key to enter the 3rd set of symbolc (separate scan codes needed) or if you pan to use an existing modifier (Ctrl/Alt/AltGr), then you have to work out the ergonomics, how freq. do you type a letter and are you placing letters in places that would be awkward (Like typing two letters in sequence with your pinky).
You might want to start with reading and testing using the following although they are less than perfect for non-english texts and layouts:

For me, having direct access to öäå is an overriding concern, since I work with transcription and speech-to-text reporting (where everything has to be interpreted instantly, like in live subtitling).

I have had a long-term plan to switch to Ergodox with a modified Swedish Colemak layout for some time now - there are a lot of thoughts going around, but I always end up against a brick wall since “everything connects” - moving one key risks introducing problems I couldn’t imagine until starting to use the mapping in real life. Also, I feel I do not have the computational background needed to do some calculations in line what the aus der neue welt Germans (and similar groups) have done for their keyboard layouts. Very frustrating!

In my modified layout I would also want to figure out how to program a layer which promises to improve the kind of dated software us speech-to-text reporters have as tools … one single macro key for ctrl+backspace, time chording combinations for other stuff, maybe similar to what Velotypists can do on their veyboards …

Anyway, nice to see this thread alive. What we really would need is just another vertical row of keys on the right hand keyboard unit

Nah, just scroll the number row one to the left.

There are a lot of things to consider such as if you want custom keyboard layouts in the OS, if you need AltGR, if you want a numpad layer, if you want to use the Fn key to enter the 3rd set of symbolc (separate scan codes needed) or if you pan to use an existing modifier (Ctrl/Alt/AltGr), …

Yeah, and I get tired just thinking about going through all of that before having a usable keyboard.

At least I think I will stick as close to Swedish-QWERTY as possible, and then iterate on the rest of the stuff. I don’t really know how malleable my brain is with regards to making changes that are too involving

@celtic and I have been working on physical layouts in other threads (for azerty, bepo and dvorak) and I think either of our layouts would work well out of the box for Scandinavian. 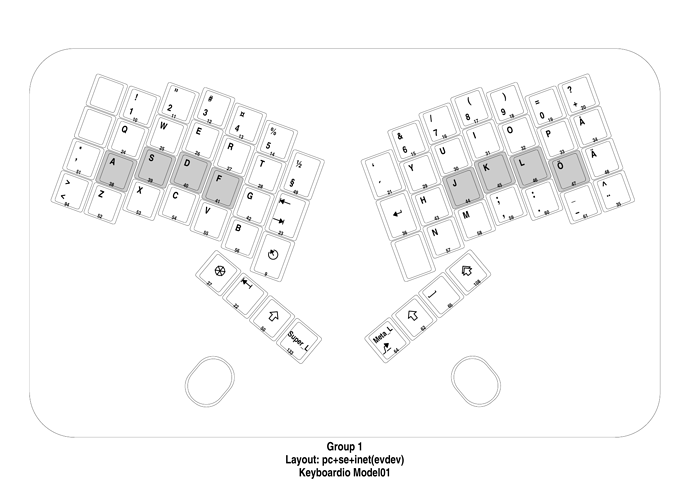 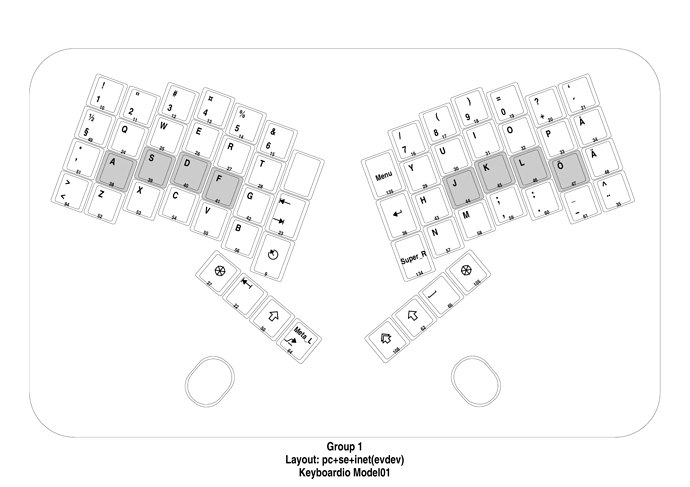 Probably won’t use these, since I’ve used my own weird layout optimised for a mixture of Swedish, English and C++ source code, for a very long time. However, I’m very happy to follow the advances you all make and learn how you make best use of the physical layout of the keyboard. I’m mostly following the utilisation of non-character keys (for lack of a better term, from a novice) like the Meta/Win/Menu…

maybe similar to what Velotypists can do on their veyboards …

Interesting, I had not heard about this. Wikipedia says:

The Veyboard is an orthographic chord keyboard, very different from phonetic chord keyboards used for verbatim transcription, like the stenotype. Such chorded phonetic keyboards produce an intermediate shorthand format in which a combination of phonetics- and spelling-based strokes are translated by software to produce the output. Orthographic keyboards, on the other hand, allow the operator to rely on more traditional spelling in shaping the output, hence the term “orthographic” as opposed to “phonetic”.

Stenographic keyboards are generally more difficult to learn than the Veyboard, but trained stenotype operators can go faster, even upwards of 300 words per minute. However, if unusual words appear, a typist using a stenotype slows down, while the Velotypist can continue with the same speed, which can go up to 200 words per minute.

The Velotype-pro contains software that allows the user to create their own abbreviations and short forms in addition to those pre-built into the machine.