I was able to get a TrackPoint module to work with an Arduino Pro Micro, but I have yet to get it work with the Keyboardio directly. I have been fighting my amateur soldering skills and it’s been pretty frustrating getting wires soldered to the TrackPoint module. It has also been frustrating trying to piece together all the information needed, so I will attempt to put all the info in this post for anyone looking to do this. It seems like a lot of you are interested in this mod, but like me have found it easier said than done.

I bought a used T410 Thinkpad keyboard, which came with a “ZD6” TrackPoint module. I was hoping for the slightly newer and cleaner-looking LVC9 module, however I have been unable to determine which Trackpoint keyboards have that particular module. I would assume a Thinkpad made around 2013-2016 as the T410 was produced during the 1st-gen i3/i5/i7 days, so like 2010.

ZD6 is just fine though, it turns out it has an identical pinout to the LVC9. I was hoping it would, as the two are very similar. NOTE: Not all TrackPoint modules share this pinout.

After much Googling, I found this: https://martin-prochnow.de/projects/thinkpad_keyboard which is the only other guy on the planet who seems to have accomplished what I am trying to accomplish with the ZD6 Trackpoint module. Props to him for blazing the trail and mapping the pinout.

1. Create the wiring to connect the Arduino and TrackPoint module 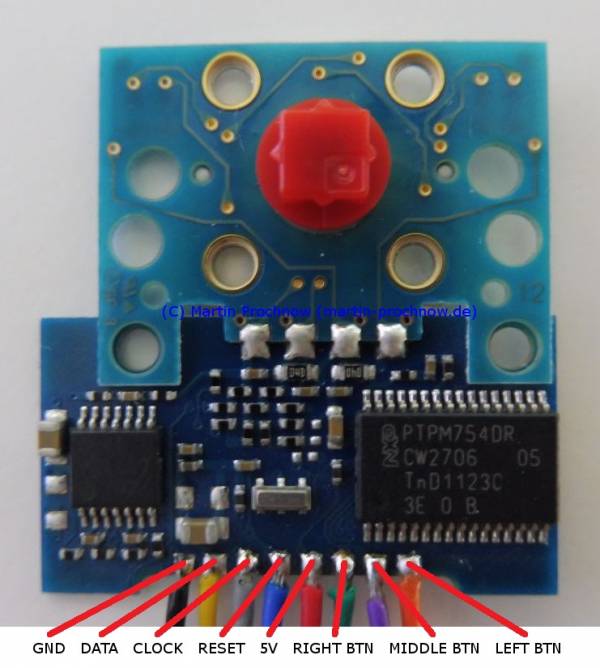 It works pretty well, although tends to move the cursor on its own for the first few seconds after it is connected to a computer. I can move the cursor by touching the PCB around the red nub. I think this is just a testament to how sensitive it is. Touching the nub will wake the computer from sleep.

Adjust Sensitivity
Default sensitivity is much higher than my TrackPoint USB keyboard. To get them pretty close (so that I don’t have to change mouse sensitivity in OS when I go between the Keyboardio Trackpoint and other “mice”), I changed the argument on this method call in the TrackPoint_INT file: trackpoint.setSensitivityFactor(0x4b); // 0xC0 (192) is default

Next steps are to leverage the Arduino in the Keyboardio to interface with the TrackPoint module. Again, easier said than done, but here’s what I have so far:

The black plastic is easily sand-able with 180 grit sandpaper, which I recommend doing to remove the protruding plastic created by the drill bit. It is very “soft” plastic and probably has a low melting point. When sanding, obviously you’ll want to protect the finish of the surrounding area with something like painter’s tape.

Alas, standard Dupont connectors will not fit with the stock Keyboardio top case. Someone else in another thread suggested cutting out some of the wood. This would work, but I don’t really have the tools to do this properly, and I am hesitant to take tools to the wood. As far as I know you can’t purchase a replacement if you screw it up (although Jesse might be able to get you one???). Anyway, this is a disappointing “oversight” in the design of the keyboard, and I can only imagine it was done for good reason.

This means that soldering to the pads on the underside of the left side PCB is the only way you’ll be able to connect anything to the expansion slots while using an unmodified top case. So far I have taken out one of the pads for one of the digital pinouts (never pull on a wire soldered to a pad!).

I have attempted to connect the TrackPoint module directly to the Keyboardio, however I seemed to have shorted D4 and D3 when I ripped off the pad and so needed to desolder the TrackPoint wires in part to ensure the Keyboardio still worked. I will probably make another attempt, however it is worth noting that there are no solder pads for 5v or Ground, only Dupont connectors. This means, as far as I can tell, you must solder 5v and Ground to the points where the Expansion Port Dupont connectors are connected to the PCB of the Keyboardio.

Also, I am not 100% sure how to integrate the TrackPoint-controlling software into the Keyboardio’s firmware. As a software engineer I have a good idea, but systems programming/C is not my strong-suit!

For now I will enjoy the fruits of my labor with the external Arduino solution.

I reached out to Jesse for more info about running the firmware off the Keyboardio’s ATMega. The D2 and D3 pins are reserved for the IC2 bus and so they are unavailable for use even though they have solder pads and dupont connectors.

Wasn’t there a post on the forum about someone using a trackpoint with the keyboardio? Was that you? I think they connected it separately as opposed to through the Arduino…

Edit: yes, that was you! Lenovo Trackpoint mod

I didn’t mean to bump this post to the top, but it appears I am outside the editing window for the original post.

You’re adding valuable information so it’s not a problem!