Uncomfortable When Wearing a Watch

One of the first things I noticed about the Model 01 was that I found it pretty uncomfortable to use while wearing my Apple Watch. The watch band would rest just on the edge of the wrist rest/palm rest, making my watch kind of dig into my wrist, and it would snag on the edge every time I moved my hands up, ie to type numbers or function keys.

Has anyone else had this sort of issue or am I just some kind of awkward size where my watch band is neither on the surface or off it?

If the palm rests were gently rounded or sloped down, this would effectively mitigate this issue and make the keyboard more comfortable to use, for me, at least. Perhaps that could be a consideration for a new version of the keyboard, although I suspect that the extra finishing steps required to add this curve would increase manufacturing complexity and cost significantly.

You could use a chisel and a rasp to ease that corner quite a bit, if you really wanted to…

Oh, I wanted to. A dremel, several grades of sandpaper, and a lot of time went into this, and it’s a big improvement. 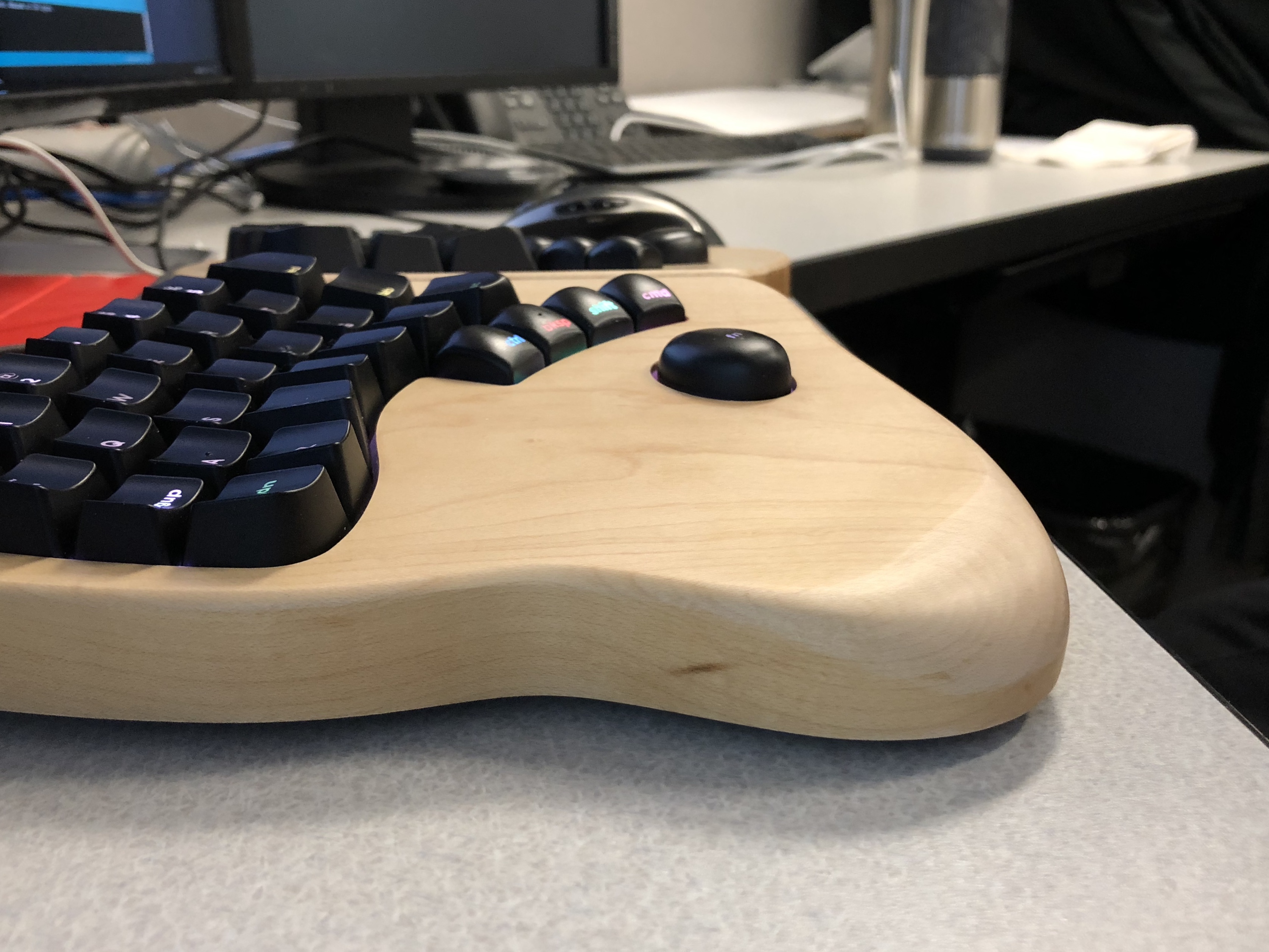 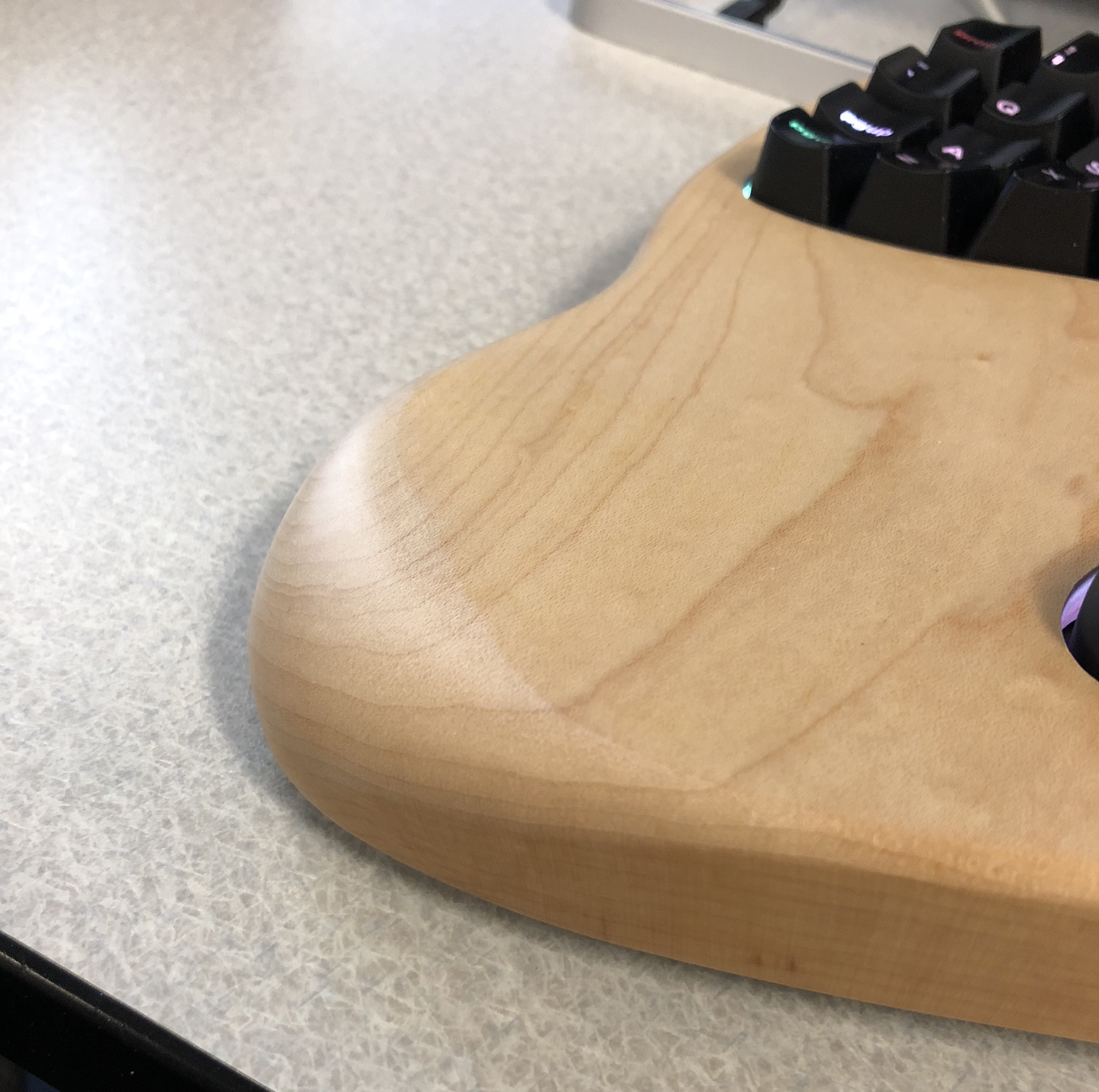 This made the keyboard much nicer to use for me.

Also, the color changed a bit where it was sanded. I suspect there is a light stain or treatment applied to the keyboard there, so I’ll have to figure out how to match up the color better.

I’d like to ease it even more aggressively than that, but I’m concerned about hitting the lug that’s inside for the screw from the bottom. Regardless, this change has already made the keyboardio-using-while-watch-wearing experience much better for me.

I have the same issue when wearing a watch, and I often end up taking the watch off. I have been using the keyboard stands. With the Model 01 I rest my palms, where as with other keyboards I have my hands elevated (piano hands, like @james.nvc).

I think I’ll try to use the keyboard without the stands for a while and try elevated typing with the Model 01 as well, although I like a slightly forward tilting angle that I get with the stands (which also raises the keyboard at the wrist).

Nice carving of the corners, @jdlien!

I like that extra length of the keyboard! That part you shaved off is where I rest the pads of my palms. I’ll wager your modification would make the keyboard more uncomfortable for me.

I understand your pain, though. I have a metal-link watch that I take off when typing on most keyboards because it knocks against the case. I’ve got another leather-band watch that is thinner and I don’t have any problems with. I see how the always-on Apple Watch would put a kink in that workflow…

You must have big hands. If I rest the heels of my palm right on the edge, the tips of my fingers can barely reach home row if I stretch. I don’t think it’d be uncomfortable for you, but your heels would be a little lower… I guess that might possibly be less comfortable, but there’s no edge digging into your hands/wrists…

All this is interesting because it shows that if you want to make something truly ergonomic and form fitting, a one-size-fits-all approach doesn’t work for everyone. Similar with the thumb keys that I and others have argued should have more keys on the inside and one less on the outside, but different others have said that there’s no way that would work for them.

I just looked at my winter driving gloves and they’re XL, so I guess I have larger than average hands. It definitely would not be comfortable for me to reach an extra button on the inside of the thumb-row.

If we’re talking uncomfortable keys: I don’t like the fn button, as I have to raise or twist my hand to press it since it’s right under the curved middle of my thumb. I suspect you’re much happier with the fn placement than I am!

Indeed–the fn keys work pretty well for me, right under the meaty part of my hand behind the thumb! I just kind of have to flex that muscle slightly to press it.

This issue has come up in the past, and while it might look a bit tacky, Jesse has suggested Sugru as a somewhat inexpensive modification to reshape the keys. I’m also a large-handed typist who’s going to give the palm keys another chance, but if it starts becoming an issue I’ll definitely change them. Rather than increase their height, I might make it stick out a bit more toward the palm area so I can actually hit it with my palm rather than my thumb.

To get the topic back on track, I think we need a permanent solution for the watch problem. I’ve been taking my watch on and off, but that is too annoying. Right now, I stopped wearing my watch entirely for the time being. Sanding off the corner is not an option either, the result looks uneven and ugly.

I think it doesn’t look too bad in real life… the biggest problem is that you’re removing the stain/treatment, hence the difference in color. It’d be somewhat difficult to manually get the edges beveled exactly the same on both halves. (In my case, I’m okay with the right side the way it is).

Hopefully a future version of this keyboard could have a bit of a bevel or contour to the palm rests in production because the contour as shown in my photos made the issue almost entirely vanish for me. As we’ve seen, however, different strokes for different folks… everyone seems to fit differently.

I think it doesn’t look too bad in real life…

I agree with you, it’s something that version 2 should definitely take into account.

As for version 1, I think soft palm rests might help cushion the hart parts of the strap, though I haven’t tried it yet. Frankly, I don’t want extra palm rests, I’m completely fine with the wood, it feels quite comfortable as is.

I hear you… it’s not reasonable to expect someone to permanently modify something so expensive. It’s not like it’s trivial to just go and buy another one if you mess it up.

I can imagine wrist rests of some sort would help but I also just liked the wood… I’d go out of my way to get wood wrist rests for my other mechanical keyboards.

Sorry to dredge up this topic, but if watchbands are uncomfortable, you might want to check out the leather bands sold at formfunctionform.com. They start at around $40 (100 for Apple watchbands), but they occasionally go on sale. When you wear a band like this, only a thin strip of leather is on the part of your wrist that touches a keyboard. No clasp on the bottom.

Sure, I guess something like that could be an option (and possibly an expensive one) - but I’ve tried several Apple Watch bands and actually like the Sport band the most. It’s a great design and is actually very comfortable with me, except when it’s resting on the stock Keyboardio Model 01, and really the main problem there is just that it catches the corner when I move my hands up to type numbers. A thinner band might help a bit…

Sanding it (carefully, and a lot) to round out the edge fixed the issue 100% for me. It’s certainly not a viable solution for everyone, but I’m pretty mod-happy with things I own, so it was a fun mini-project for me.