Dust cover for the Model 01?

(This is about as loosely related to hardware hacking as it gets, but I couldn’t find any other category to put it under.)

It just occurred to me that it would be really nice to have a smart dust cover for my Model 01.

Obviously I can just find some appropriate material and cut out the right shapes, but it would be much nicer to have something designed specifically for this purpose. Is this the kind of thing other people would be interested in too?

I know it’s a long shot, but if enough people were interested, and assuming it’s a simple enough thing to design and produce in batches of 10s or 100s, then maybe it’s something that Jesse or the wider community might be inclined to have a proper go at, with the goal of “mass” (albeit low volume) production? Personally I would happily pay for something that looks smarter than whatever my efforts with scissors look like

I think it’s a great idea, and an easy one to design.

Mostly easy to design because I imagine the basic design would be the outline of the keyboard plus 5mm on all dimensions.

I also think you’re the best person to head this up!

Jessie and Kaia are over their heads trying to get our keyboards assembled and shipped (it would be bad form to pile more on them). So this is a project for the wider Keyboardio community to step up with. And as this is your itch to scratch, you too can join the ranks of makers.

A simple vacuum form on each keyboard half could be accomplished using some plastic plates as the material (transient red?) , your oven, a shop vacuum (or good home vac), and a few dollars in a vacuum forming diy table

That sounds great, but how about for those of us with none of those tools, and who don’t even know what “transient red” plastic plates are.
Maybe that’s only me, but I am interested in hearing more.
I would be happy to shell out a few bucks, or hours, to acquire one, or more.

Those could also be pretty easily 3d printed. Not as pretty as a vacuum form, nor as cheap/quick. But a lot of folks have access to 3d printers, even if through friends of friends. If there’s enough interest, I’d be willing to print them out at a minimal upcharge to cover materials plus a little wear/tear. Probably something like $15 shipped in the US to just spitball pricing? I’m probably going to make a model if nobody beats me to it (and it’ll be made available somewhere free of charge if I do), just to hold and protect both halves in a travel case. My only concern is marring the finish, as most 3d printable plastics are kinda rough.

I like the idea of (semi?) transparent cases/covers. Maybe could do that with small felt pad standoffs for dust covers. For travel I think I’d elect for a little more room, and fabric lining. Been kicking around ideas for a little bit now.

Typo… That should have been transparent.
. 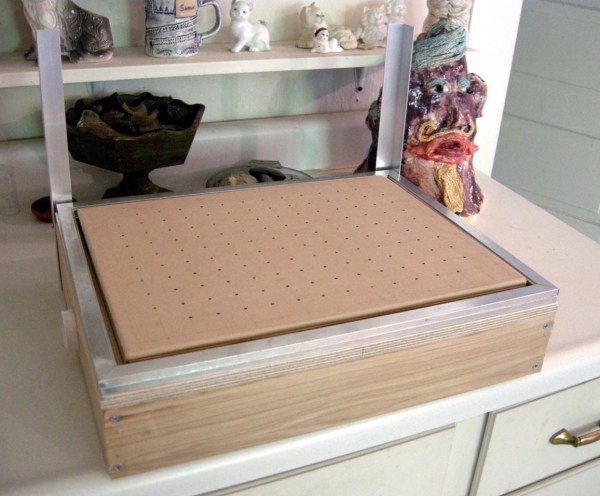 DIY Vacuum Former On The Cheap

Vacuum Forming is a process used to mold plastic into a desired shape. A thin sheet of plastic is heated to a soft state and then air pressure is used to press the plastic down around or into a mol…


.
Item 1 - free vacuum chamber
Honestly any sealed box that is slightly larger that the keyboardio with a couple holes poked into the top would work for the base chamber… Even the box it was delivered in with the seams taped. Then attach a vacuum hose to the side… Airtight tape job again.

Item 3 - picture frame to hold plastic $5. Inside Bigger than keyboardio half

Item 4 - tape - for box above and to tape plastic to open picture frame. $5

Item 5 - oven to heat plastic which has been taped to picture frame. Note if using transparent plastic plate - - cut out sides so you have a flat piece $5 for 25

Using mitts, quickly take out plastic and place on vacuum chamber with keyboardio half centered on box and vacuum running.

Finally had some time to sit down and work with the new 3d modeling program and give things a whirl. I’ve got the world’s most basic example of what it could be here (warning, unoptimized STL, it’s 20mb): https://www.dropbox.com/s/ylpf3iw1umow0ev/model01-do-not-print-cover.stl?dl=0

Looks like this if you don’t want to grab the whole file: 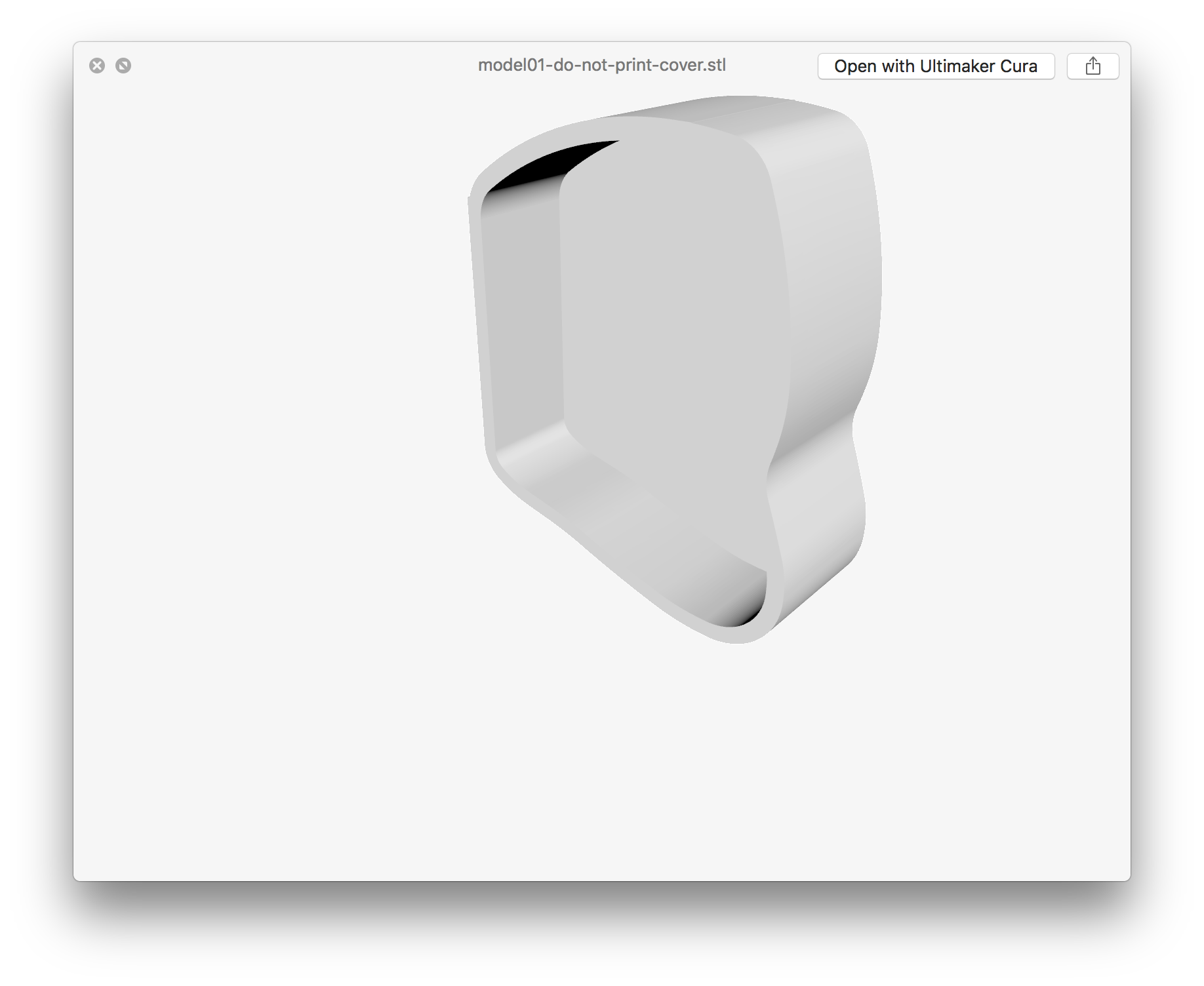 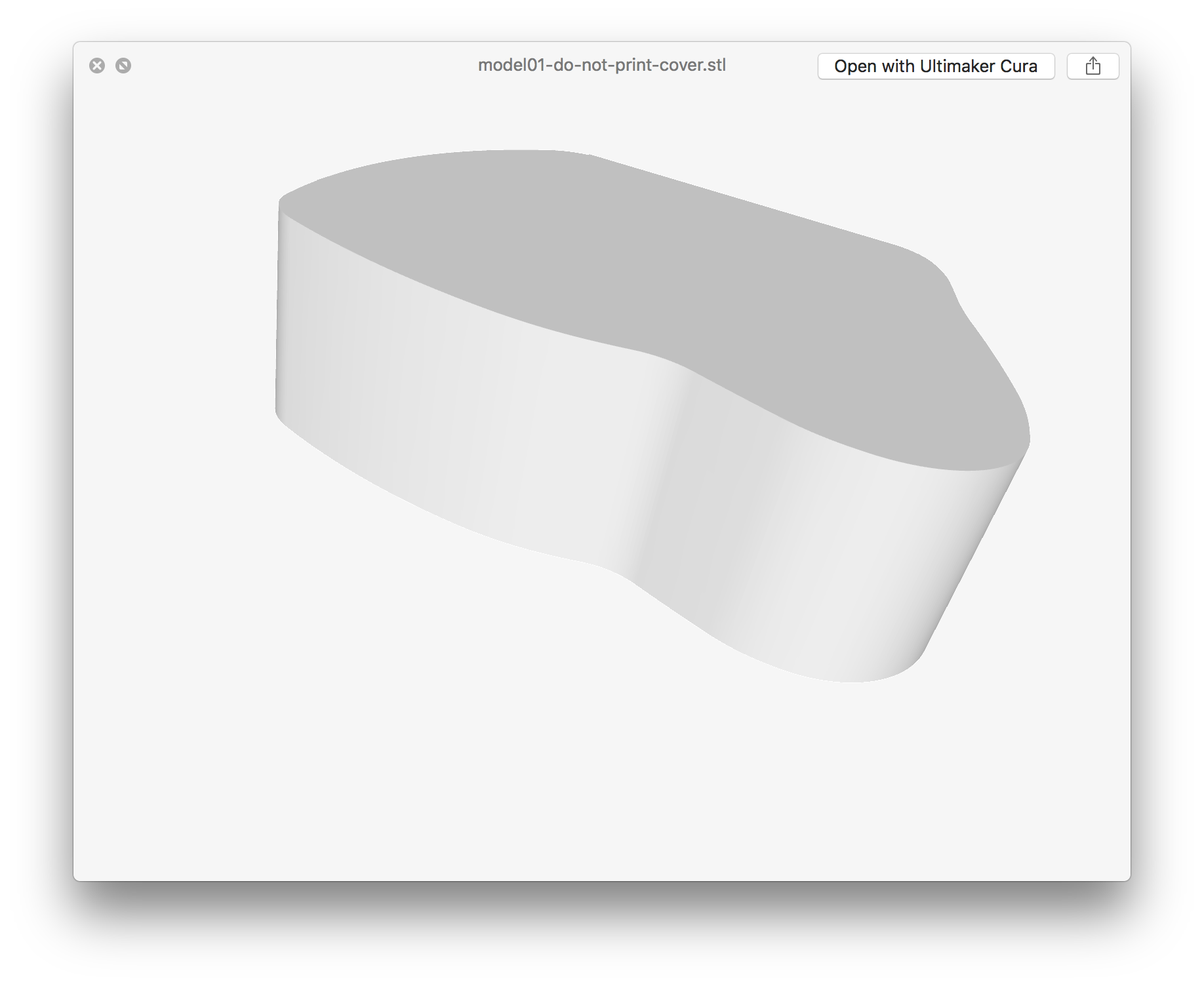 As the name implies, I don’t recommend printing it. Pulled the SVG from GitHub, isolated the outline and just grew it out for the shell…in theory it would work at the right scale, but I just wanted something to glance at for now. Anyone want to chime in on what they’d want out of a case? Could have a couple standoffs resting against the top surface (think where your palms rest) for a felt pad or two? I thought about hugging the top contours of the main and fn keys but that would be a much more difficult print with standard 3d printers (they don’t print free hanging things in space well, and removing supporting structure can be a PITA).

Any ideas would probably get this rolling sooner. Otherwise I’ll end up with something…eventually.

This is a good start and I had a “brilliant” idea, with a bit of modeling I could come up with a dust cover that can also be used as carrying case.
Give me some days…

This is a good start

^ That’s awfully polite of you. It’s a bit 'hello world’ish. But definitely interested to see your carry case concept.

I wish I knew how to sew. If I did, I would use neoprene (or better yet, quilted/padded fabric, to have some fun with colors/patterns) and sew a cover for each half that could be rested over each side when it was sitting on your desk, but each had zippers or velcro or something on the bottoms edges so you could zip/fasten them together and make it a transport case for the two halves resting bottom-to-bottom.

Progress is slow but not dead. Wife , Kids and work take all my time.

Anyway. After having it almost done in my head I suddenly realized “what if people use their keyboard connected and not in the split setup” and with this … all my imaginary designs went down the drain

So it will take longer to combine all aspects of having a dust cover for connected and split and use it as a carry case. 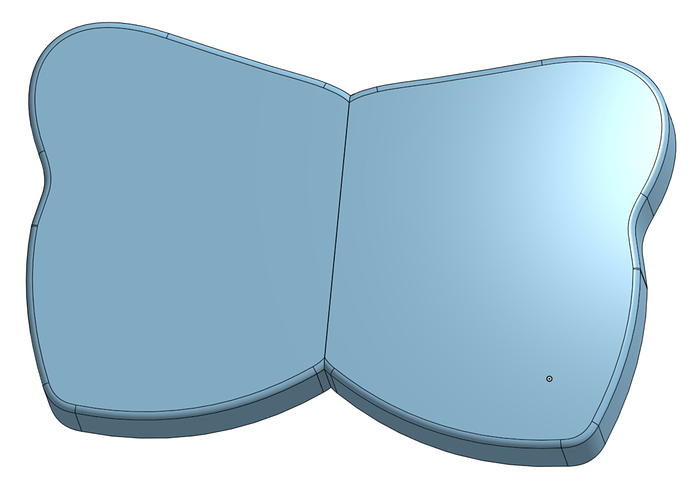 As someone who uses it in split mode, I wondered how you were going to tackle that

So … I bit of an update
This is a work in progress shot of what I’m thinking of a good solution. Not all features are designed yet or in the final form 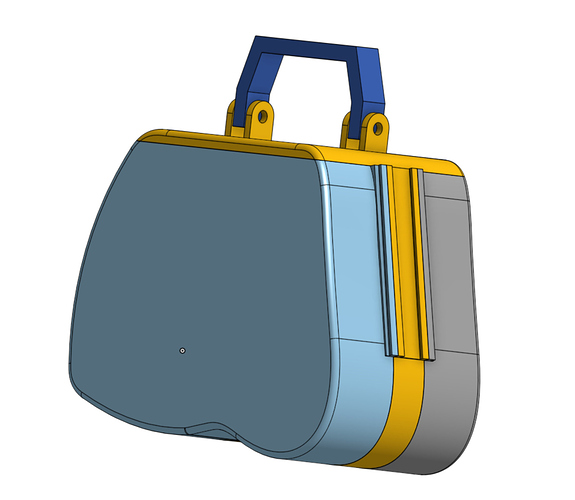 The blue and gray halves are the lids that are removed and used as dust covers. When used as carry bag they are used as cover of the case and are secured with the black sliders that came with the keyboardio on both sides.

Once the design is completed I’ll do an update again before I’ll start making it printable.

Amazing work!! Can’t wait to see this in real life!

This is miles above anything I’d have managed to produce. Very excited. I like using the sliders as closures, very slick.

Will there be a little room inside to line the plastic with something soft that won’t scuff up the keyboard? And I presume the center yellow component will have some room for storing the usb and rj45 cables?

Yes there is plenty room for your cables inside the middle thing. I had to do it quite large to make the sliders fit. But I might change the position of them because I came across some problems.
About the soft things. Actually with the current design the lids won’t touch the keyboard at all. The first prototypes will tell if it all works out as planed I was thinking about some rubber here and there to keep it in place if the sliders won’t be enough to keep the keyboard halves in place but we will see.

That’s super-fascinating. It’s not at all like the solutions I was envisioning, which makes it even more awesome

Well thank you for the flowers

I have to agree, this is pretty amazing. The dust covers were something I had been thinking on already, but on add on the fact of being able to transport it when needed is awesome. Keep up the great work! I look forward to seeing where this ends up (hopefully with one in my posession, haha!).