Followed instructions at https://github.com/keyboardio/Kaleidoscope/wiki/Install-Arduino-support-on-Windows
It’s my first time running arduino ide. I downloaded from windows store on a windows 10 machine. According to my understanding of the instructions I did not install usb drivers. Receiving error “board model01 (platform avr, package keyboardio) is unknown” when clicking checkmark to verify. Have retried steps using other version numbers and other ports. Only three com ports are selectable. I have tried all three. Not sure what else to try.

I had the same problem. I downloaded Arduino IDE version 1.6.10 from [https://www.arduino.cc/en/Main/OldSoftwareReleases#previous] , uninstalled the latest IDE (1.8.7), installed the older version, then proceeded from Step 2 of the very link you used. Everything went fine from there. Hope this helps. (real credit goes to my genius brother for solving this one).

I’ve managed to reproduce this with Arduino 1.8.7 and Kaleidoscope 1.23, but not with 1.91-beta. Does that match what you folks are seeing?

I had the exact same issue; I tried installing the 1.91-beta on Windows and could no longer compile, even after I rolled back to an 1.90-beta and reinstalled Arduino 1.8.7 from scratch. I can confirm the 1.92 beta fixes the problem on Arduino 1.8.7. Thanks for fixing the issue Jesse.

What can I do?

There should be an 1.93 beta out, which should not have this issue anymore. Can you try upgrading?

Thank you! It’s a little bit strange because I don’t have the option to install 1.93 version. 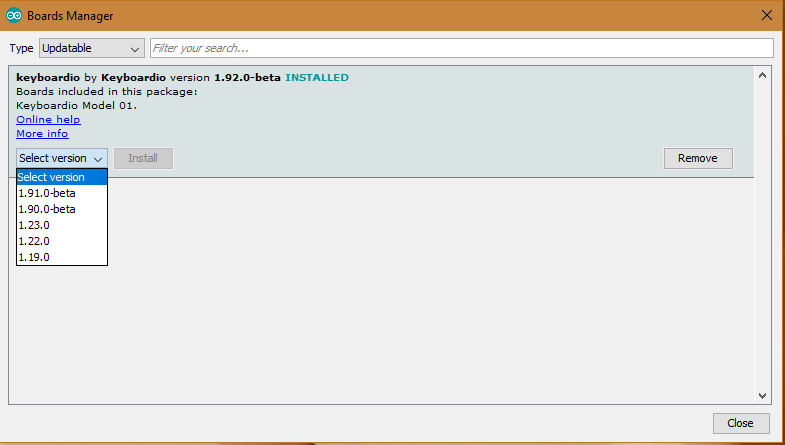 Did you install Arduino from the Windows Store, or using their own installer? If you did the former, I would recommend removing it, and installing via the official installer. The Arduino in the Windows Store has issues updating the list of boards for some odd reason.

One thing that may be worth looking into as well is that changing Compiler Errors -> All in the Arduino IDE causes a segmentation fault when compiling the latest firmware for me on Windows 10. Changing back Compiler Errors -> Debug builds and works as expected.

In order to test functionality of the build system after a modification the bundle repo, I for once tried the Arduino GUI. But I ran into the same error message board model01 (platform avr, package keyboardio) is unknown as described above.

@algernon, is there any documented recipe that I can follow that explains how to build a development version of the firmware with the GUI on Linux?