Keymaps for one hand

I’ve found myself using Inkscape a fair amount in the past few days, and it has occurred to me that much of the time, I’ve had one hand on the keyboard, and the other on a pointing device (usually mouse, but sometimes pen tablet). I don’t currently use Inkscape often enough to put in a lot of work setting up my keyboard for left-handed use only, but I’m sure there are lots of people who use some programs with one hand on the mouse and the other on the keyboard all the time (certain games come to mind). I’m wondering if anyone else here has put some thought into one-handed (or partial one-handed) use, and how they’d set up the Model 01 for it.

The most useful starting point would probably be the half-qwerty: 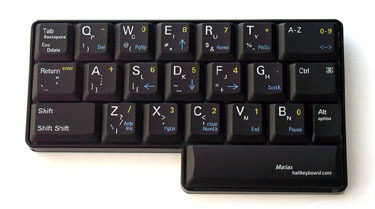 In this model, you use one half of the keyboard as normal, and there is a mirrored copy of the other half in an embedded layer (the palm shift would be ideal for this).

Now, qwerty is not exactly optimised for such usage. Dvorak and Colemak, due to their emphasis on hand-alternation, would be even worse. But it has the advantage of being usable without much retraining for someone who is already proficient, and/or who only wants to use one-handed some of the time.

If you are a fully one-handed typist however, I doubt the model 01 is for you.

While pondering the topic this morning, I just thought of having a modifier to mirror the right half of the keyboard. I’m glad to know I’m not the only one who’s thought of this.

I’m not concerned about typing speed, though, since I’m thinking of using it as a two-handed person using a program where the various letter keys have functions apart from typing (e.g. Inkscape).

I hadn’t heard of the half-qwerty before – thanks! It looks adorable.

Something I heard others experiment with, was to have the mirrored half be available on double-tap. So you double-tap, say, T, and get Y. I’m not sure what the outcome of that experiment was, though.

Double-tapping would be more than a little bit awkward with double letters, would it not?

Double-tapping would be more than a little bit awkward with double letters, would it not?

Maybe. I’d have to try it. That would be a good reason to keep certain keys on one side, even if they’re not the most common ones (L, perhaps).

If you are a fully one-handed typist however, I doubt the model 01 is for you.

I stumbled across this topic some months ago when I was thinking about getting a split keyboard to set it up for one-handed use (due to a tendonitis from typing in my right hand, I can only use my left hand for typing which was extremely tiring on my standard MacBook keyboard; I was even afraid of losing my left typing hand as well…).

After some months of one-handed keyboardio experience (with a layout similar to the FrogPad, so no double-tapping needed), I am extremely glad I didn’t trust the quote above.

My left hand has recovered from the stress it had built up from doing all the typing on my standard keyboard on its own; and if I type in a relaxed pace on my keyboardio, I feel that I can type forever without ever getting tired. Admittedly, I do not type very fast, but since this wasn’t the purpose, I am more than happy to be able to type at all!

So, dear fellow one-handed typists, do give it a try!

I am glad to be proven wrong in this instance!

Can you share your layout for this since it seems to have been very effective for you?

@TreTuna Sure, I even already did (Share your layout)