After being away for two weeks I wanted to continue working on Chrysalis. I installed macOS High Sierra to test whether there are any issues with the app in its current state and unfortunately I’ve run into a showstopper: Launching the application with a compatible device connected (Dygma Shortcut prototype version 4) I’m presented with the following screen: 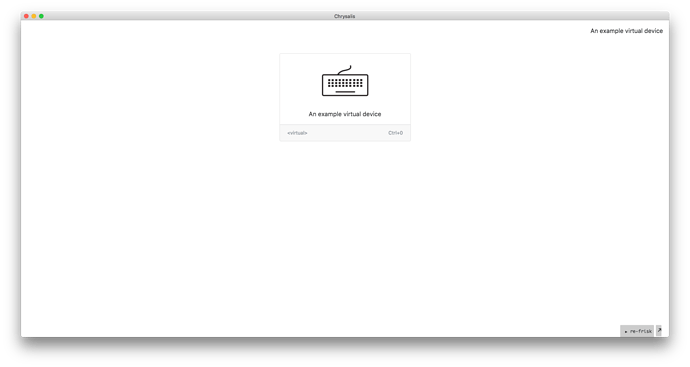 First of all, the user interface isn’t rendered correctly (the top menu bar is missing) and I’m not seeing anything, but the default virtual device.

If you’re one of the happy few who already own a Model 01, could you please do me a favour, go to https://github.com/algernon/Chrysalis, clone the repo, follow the instructions to build and launch the application, take a screenshot of its main window and post it here? Please make sure your Model 01 is connected.

The TL;DR of the root cause is that a few libraries under Chrysalis (bootstrap & serialport) changed incompatibly, and that caused the issues.

The serialport library used to report vendor and product ids in hex, like 0xf00d, but now it strips the 0x, which made the parser mistakenly parse it as decimal, and then our patterns stopped matching. I fixed this by telling the parser that always parse it as hexadecimal. This made supported devices appear again.

Bootstrap changed a few things, like, how the navbar should be marked up, and a few other little things. I followed up on these changes, and we have the navbar back now.

There may be a few little glitches here and there, but things should be back to normal. None of the issues were specific to OSX, or High Sierra, by the way.

(Can’t wait to transition away from Bootstrap… in due time!)

That fixed it, thanks. Let’s close this thread. Also, let’s move away from Bootstrap ASAP ;).