Now that I’m actually typing this out I realize this is two questions:

Is there a PDF or image of the keys where they are color coded to show which digit is intended to press which key?

Is there an LED plugin that colors each individual key appropriately?

I still feel as though I am fighting against the intended usage of the key board sometimes. The bump marked keys for the home row help, but I would really like a visual chart to work against. Such a chart might also allow for typing game modifications since it would be easier to substitute similar finger movements where appropriate. 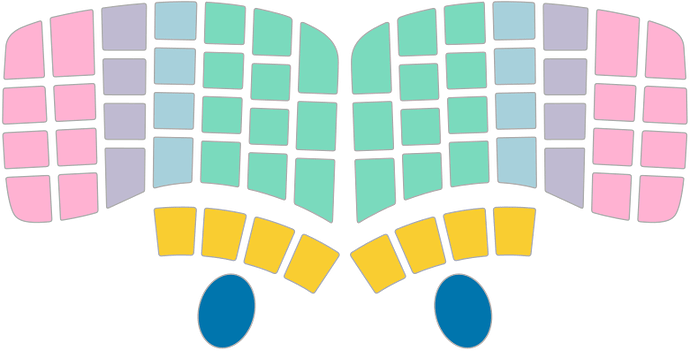 You can use the Colormap plugin to set up any colormap you like. Perhaps the easiest way would be to use Chrysalis to set up a color map for your fingers.

The M01 has a columnar layout, so I would think that it’s fairly straightforward, IMO. The two bumps correspond to the index and pinky fingers. The keys in each column above and below each of your fingers is intended to be hit with the same finger in the column on the home row. The keys “inside” of the home row between your hands (right edge of the left side, left edge of the right side) should be hit with your index fingers, while the “outside” edges (left edge of left side, right edge of right side) should be hit with your pinkies. The thumb cluster should be hit by your thumbs, and the function keys should be hit by your palms. The only ambiguous keys are the esc and butterfly, which you might find your thumbs being easier to hit than your index fingers.

Of course, that’s just a guideline. Everybody has different hands. As long as you’re doing something that feels comfortable to you, I don’t think there’s really any harm.

Also thank you bagels, this is a more explicit explanation that I feel might benefit others.

It’s funny, even though I haven’t practiced a ton, just giving it time seems to make a big difference. I guess spaced repetitions really are the key to everything.