Noise/coil whine when LEDs are on

I’m very glad to have just received my Model 100. But after playing around a bit I noticed that there is a noticeable high-pitched buzzing sound/coil whine. I quickly figured out that it changes when I change the LED mode and is gone when I turn the LEDs off. It seems to be loudest when it’s in the mode where the rainbow colors shift from left to right but also changes volume in that mode continuously. It’s very audible when I put my ear to the keyboard but unfortunately still audible when I am at a normal distance.

Has this been the case elsewhere before and is there anything that could be done to remedy this?

I have also noticed the whine from the left side of the Model 100 when LEDs are lit up past a certain brightness. I first noticed it when I was setting the thumb keys on one side to full white (#FFFFFF) to check a suspected color balance issue for another user. Later on, I realized that the rainbow wave effect also produced a somewhat softer cyclic whine.

I think the 0.90.2 firmware with the gamma correction fix makes the whine somewhat quieter on the rainbow wave mode. It may be that the default sketch should decrease the brightness of the rainbow modes slightly. (I do also hear a fainter whine from the rainbow cycle mode.)

I have yet to open up the enclosure to localize the source of the whine. It’s somewhat puzzling, because there are no coil inductors on the left hand schematic, only ferrite beads, which should be less noisy. Some of the capacitors might be whining, if their dielectrics are piezoelectric (like some ceramic ones).

My model 100 came yesterday, and I have the same issue. It is loud enough to be annoying in a normal seating position, indeed. My model 01 does not have this issue. The rainbow LED mode was always my default, so I hope there is a fix for this

@jesse maybe you could briefly chime in and say wether this is something you have noticed before. In other words, is this likely to be the case on all Model 100 keyboards or just an issue on some specific ones?

It would be helpful to know what LED modes sound the loudest to people. I personally find that it’s loudest with the rainbow wave effect (number 2 in the default firmware).

If you’re willing to compile a custom sketch, try adding the FocusLEDCommand plugin, and then adjust the global LED brightness to a lower value using the “My Keyboard” preference in Chrysalis. (Or using something like the focus-send utility that’s in the Kaleidoscope source tree, if you’re comfortable doing that.) I find that 63% (160/255) quiets it down considerably for me, at the cost of making some of the other built-in effects too dim.

I’m still investigating other possible ways to mitigate the problem.

So, I’ve never been able to hear it on any Model 100 I’ve touched with any of the standard effects. With a handful of full-brightness LEDs and my ear near the board, I’ve been able to replicate this on a bare left hand.

Finally got some time to compile a custom firmware with the FocusLEDCommand plugin enabled.

I have to put the brightness to a value between 50% and 60% to make the sound go away. Or more precise, in that case the coil is not louder than it is with the LEDs completely turned off. It does indeed make the mode a bit dim, let alone the other modes.

I also noticed the following lines in the default firmware source:

So, even though the comment says the brightness is set to 150, it is not. Setting it to 150 solves my issue (although it is a bit dim).

So, even though the comment says the brightness is set to 150, it is not. Setting it to 150 solves my issue (although it is a bit dim).

Glad to hear it helps. The comment is probably left over from the Model 01 sketch, but the brightness was bumped up to 255 for the Model 100 because its LEDs are dimmer for a given absolute brightness setting (partly due to the way they’re multiplexed).

I find that a brightness of 180 for the rainbow wave effect quiets down the noise without being too dim, but that can vary a lot depending on how sensitive your hearing is and the details about the analog electrical properties of your USB connections.

I’m working on some firmware updates to turn on spread spectrum support in the LED driver, which should further reduce the noise. Unfortunately, it involves flashing the keyscanner firmware, which can be a bit involved (but hopefully we can add a usable workflow in Chrysalis).

One possible mitigation is to use a shorter USB cable, or to use one that has heavier gauge power wires. (lower AWG number = heavier gauge)

A more invasive mitigation is to add capacitance (maybe 100µF per side) to the +5V buses inside the keyboard. Note that this can dramatically increase the inrush current when the +5V buses get switched on, and some hosts and hubs might not like that.

@jesse Hi, Jesse, I also hear the noise from my new 1 week-old keyboardio model 100. I didn’t change anything about LED from the factory setting (color, brightness, etc.). So I see that there are 15 default LED modes it comes with:
each of 7 rainbow colors (x7) - blue on/off - dark1 - dark2 - dark3 - dark4 - rainbow1 - rainbow2 - floating around.

Out of these, it makes noise with rainbow1 and rainbow2 modes (rainbow2 with louder noise than rainbow1).

I recorded my keyboardio for you (link below); hopefully you can confirm the bug and help me fix the issue. Let me know if you have any further questions. I am happy to assist you however I can.

We’re still digging into it. One straightforwardish way to quiet it down is to reduce the LED brightness on your keyboard a bit, which I believe is an option with the latest build of Chrysalis.

I just set up my Model100 as well and I’m super excited about it! But – yes, there is a noticeable coil whine. I’ve tried capturing it on a video but my phone mic doesn’t pick it up. I’m noticing it in a few modes:

Where I don’t hear the whine, is in any of the solid color modes.

HTH - let me know if there’s any more info I can provide to help debug.

Thanks for the data! Only a few people have reported hearing a whine when all LEDs are off.

Is your Model 100 plugged into a powered hub? Or directly into a computer? With what kind of cable?

My keyboard is plugged into a powered hub - it’s this one. The cable I’m using is a cable with one of those magnetic couplers, something (but not exactly) like this one. It looks like they’ve swapped out the product in amazon because that’s the one that’s linked in my order history, but it’s not the exact one I have.

I can try some different cables later. My laptop’s fan is running on high right now which makes this a bit harder to debug.

Well, that’s embarrassing. I realized the coil whine was (for most cases) actually coming from my docking station (the one I linked above). Sorry for the confusion. I connected the keyboard to my computer with a USB-C cable and the whine is gone in all the cases I mentioned above except the cyan/pink/yellow unicorn looking LED mode. I’m not sure which one that is. I took a picture: 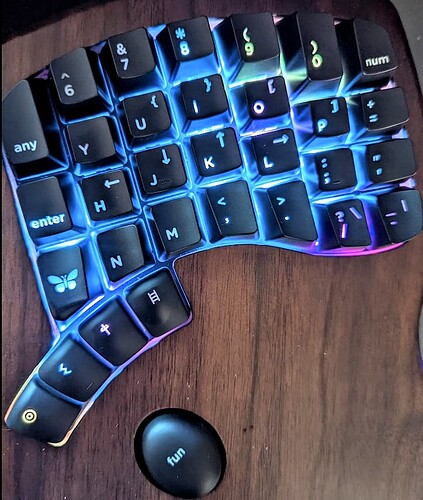 Thanks for the updates! Are you using the factory firmware, or a fully upgraded version? I don’t recognize that LED mode, unless it’s an overexposed photo of the rainbow wave mode. Is it animated or static? How many presses of the LED key is it to reach the cyan/pink/yellow mode from a mode that you recognize, and which is the last mode you recognize in that case?

I’m using an updated version of the firmware (as of a day or so ago – v1.99.7-26-gefefe804).
If it helps, you can see my setup here (please excuse the mess, I’m halfway through porting my old Model01 settings over =P)

The mode in question is not rainbow wave mode. It’s static, some keys are unlit, and the lit keys appear in varying pastel shades of cyan, pink and yellow. Here’s a hopefully more color-accurate picture: 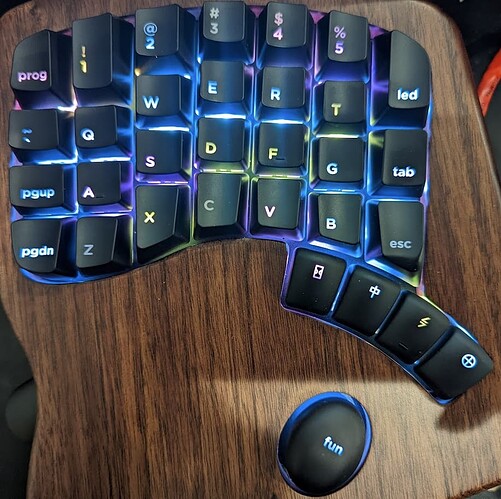 It lives between the alpha-square mode and the off mode, so cycling through the modes, I get:

Looking at your sketch file, that’s likely to be ColormapEffect, which might not be correctly initialized. It might be reading some random data out of EEPROM if you haven’t done an EEPROM erase.